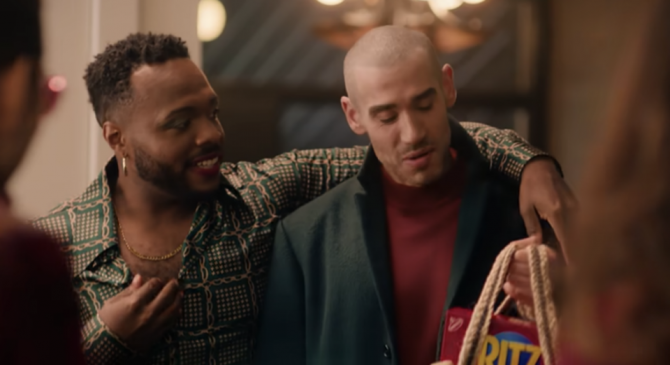 Never one to pass up the opportunity to embarrass itself with a bit of hysteria, the noted homophobes of the American Family Association have targeted yet another inclusive ad; this time, a commercial for Ritz crackers.

Yahoo News reports that the new commercial for Ritz, entitled “Where There’s Love, There’s Family” drew the ire of the AFA for showing two men in an affectionate relationship together over the holidays…while enjoying Ritz crackers of course. One of the men in question wears make-up, and the commercial implies he is genderqueer. The ad launched last month, and won the praise of GLAAD, with President Sarah Kate Ellis praising the commercial as “a powerful example of how brands and media can step up and tell LGBTQ stories not just during Pride Month, but all year round.”

The AFA had a very different reaction. The group has now launched a petition to have the ad pulled, which, at the time of this writing, has netted 50,000 signatures.

“Ritz Crackers is attempting to normalize the transgender lifestyle by airing a commercial that has absolutely nothing to do with selling crackers,” the petition notes. The company’s most recent ad features a man putting on lipstick like a woman and effeminately clinging to another man, to brainwash children and adults alike by desensitizing audiences.”

The company’s goal is to redefine family as something other than God’s biblical design for gender and sexuality,” the petition continues. “In its own words, Ritz says, “We’re encouraging people to rethink what it means to be family.”

The petition also goes on to further shame Ritz for partnering with the It Gets Better Project for donating $50,000 to help prevent queer teen suicide.

Patty Gonzalez, senior marketing director of Mondelez International, the company that owns Ritz, said in a statement: “At a time when our families may be strained as a result of social distancing, political tensions or personal orientations and identities, the Ritz brand’s campaign is intended to encourage Americans to help build a more accepting world and welcome in those that may be feeling disconnected or alone.”

Gonzalez then added the ad “sets out to remind consumers that there is strength and love in togetherness, and a blood relation isn’t the only way to define family.”

The American Family Association has a long history of scurrilous, hateful and hysterical outcry against companies that affirm LGBTQ people. The group, along with its offshoot One Million Moms has led unsuccessful campaigns to boycott the Disney series DuckTails, Hallmark movies, the film Toy Story 4, supermarket chain Whole Foods, and retail giant JC Penny, among many others, all over queer inclusion. The Southern Poverty Law Center has designated the AFA a hate group for “propagation of known falsehoods and demonizing propaganda” against LGBTQ people.

you always remember your first
8

you always remember your first
8