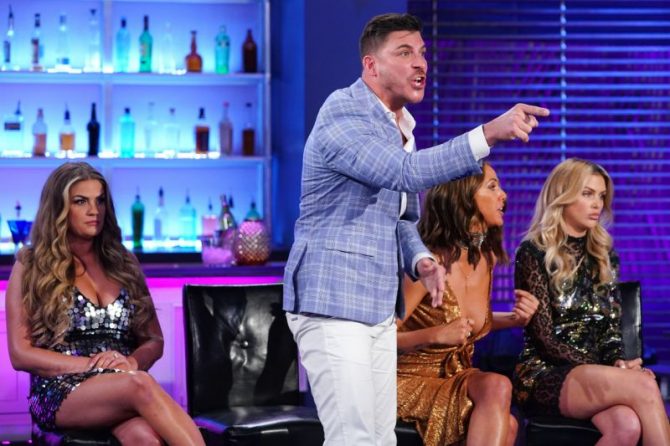 Homophobic reality star Jax Taylor is at it again.

During an appearance on Watch What Happens Live!, the Vanderpump Rules star outed his co-star Ariana Madix on live television then quickly walked it back with a faux apology.

It all started when a caller asked Taylor about Madix and her boyfriend Tom Sandoval’s relationship. In the middle of the question, Taylor interrupted by mumbling, “She likes women.”

That’s when Taylor’s wife, Brittany Cartwright, who was sitting alongside him, jumped in and said, “Don’t say that! Don’t say that!”

But by then the cat was already outta the bag.

Cohen quickly interjected, “You think Ariana likes women? What do you mean you didn’t mean it? You just said it.”

That’s when Cartwright tried shutting down the conversation by saying Madix “likes everybody, just like most of us do!”

“Just own it,” Taylor quipped. “That’s fine. Just don’t lie about it.”

Jax Taylor is a truly garbage human, shit like this is gross #WWHL #PumpRules https://t.co/vihVqWE6fg

For the record: Just because a person isn’t out publicly doesn’t mean they’re lying about their sexuality or that they aren’t “owning” their identity. It just means they don’t feel the need to share it with the entire world. Even reality TV stars have a right to privacy.

After the show aired, Madix took to Twitter to set the record straight, letting everyone know that, yeah, she’s bisexual.

“I DO like women AND men. it’s called being bisexual,” she tweeted. “Ever heard of it? #thisisnthard”

i DO like women ? AND men. it’s called being bisexual. ever heard of it? #thisisnthard pic.twitter.com/bJwC0VWmZe

Madix’s sexuality came up last season on Vanderpump Rules when it was revealed she had a sexual encounter with another woman in the past, but she has never publicly come out as bisexual. Until now.

This isn’t the first time Taylor has let his true true colors show. Last November, he spouted off homophobic remarks on Twitter then claimed he can’t be antigay because he used to live in West Hollywood and 50 percent of his friends are homosexual.