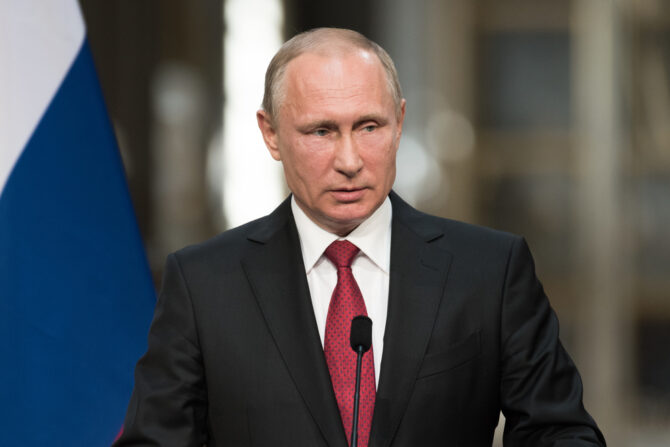 Using homophobic slurs and dropping “gay” as an insult is never OK, even in the case of tyrannical world leaders.

Amid Russia’s invasion of Ukraine, Russia President Vladimir Putin has drawn condemnation from leaders around the globe. U.S. House Speaker Nancy Pelosi even called him a “tyrant” who is launching a “total assault on democracy.”

On social media, meanwhile, people have been calling Putin “gay” in a seeming effort to troll the 69-year-old, who only two years ago vowed to never allow gay marriage in the country.

But on Reddit, users in the r/gay forum aren’t having it. “I think using the word as a slur is kind of insulting to other gay people, especially when Putin’s government creates homophobic law,” one person wrote earlier this month.

So far, that person’s post has received more than 600 upvotes and more than 100 comments, with many other Redditors agreeing with the original poster.

“I think Putin’s actual epic flaws are adequate to demonize him,” one person wrote. “Using homosexuality as an insult or put-down isn’t resonating as cool to me.”

Another person said, “It honestly feels like we’ve reverted back to 2001 with ‘that’s gay’ vernacular, and it’s unfortunate.”

A third commenter, meanwhile, revealed that even today’s kids are using “gay” as a schoolyard pejorative. “My little brother is a fourth-grader, and all his friends non-stop call people gay,” that commenter wrote. “It’s annoying and disrespectful to us.”

Someone else said that they find “some peace” that people are “using [Putin’s] homophobia against him” but worry “that the difference between an insult of one man vs. a slur against the entire gay community might be too subtle for many people to understand.”

And other Redditors said that they wouldn’t want Putin on their team, anyway. “I’m all for inclusion, but that Putin boy ain’t no friend of mine/ours,” one wrote. “He doesn’t deserve the HONORIFIC of ‘gay.’”

Related: This legendary gay Russian composer is being canceled because of Putin

Some Reddit users cast dissenting votes, however, including one person who said that hearing “gay” as an insult used to make him angry. “But as a taunt to someone who is staunchly homophobic, I feel it’s kind of funny,” that commenter added. “Their way of thinking is just so irrational that it’s hilarious to throw it back in their faces and to know that it would make their blood boil.”

But most of the commenters agreed that using “gay” as an insult, even for someone like Putin, is still harmful. “Leaning in on homophobia to reticule someone just perpetuates homophobia,” one wrote.

Another added, “Yeah, guys, let’s just keep using ‘gay’ as a punchline and then complaining when other people do the same. I’m with [the original poster].”

A similar controversy stormed three years ago, too, after The New York Times posted an animated cartoon depicting a romance between Putin and then-U.S. President Donald Trump.

“Depicting public figures as gay or bi in an attempt to mock them is a damaging trend that needs to stop,” Kim Sanders, then the director of communications for British charity Stonewall, said at the time, per Reuters. “These images reinforce a harmful narrative that being LGBT is inferior or something to be ridiculed. This isn’t political satire, it’s just old-fashioned homophobia.”