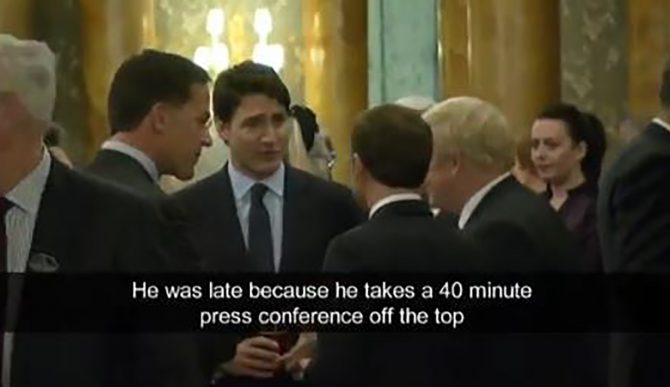 Princess Anne isn’t the only who was one caught throwing royal shade at Donald Trump during the NATO summit in London this week.

The 69-year-old daughter of Queen Elizabeth II was caught on camera opting out of a royal receiving line for Donald and Melania at Buckingham Palace at the close of the first day of the summit.

The video, which has been widely shared on social media, shows Trudeau, Macron, and Johnson gathered together at a reception at Buckingham Palace.

It starts with Johnson looking toward Macron and asking, “Is that why you were late?” To which Trudeau interjects, “He was late because he takes a 40-minute press conference off the top.” After a quick cut in the footage, Trudeau adds, “I watched his team’s jaws drop on the floor.”

Macron and Johnson’s offices both declined to comment on the video, but Trudeau later confirmed that, yeah, he was talking about Trump (busted!). He explained that the moment that made “his team’s jaws drop” was when the president announced the next year’s Group of Seven summit would be held at Camp David.

“Last night I made a reference to the fact that there was an unscheduled press conference before my meeting with President Trump,” Trudeau said. “I was happy to take part of it but it was certainly notable, and I’ve had a number of good conversations with the president over the course of this day and yesterday.”

Evidently, Trump felt otherwise. After seeing the video, he called Trudeau “two-faced” and said he’s just bitter because “I called him out on the fact he’s not paying 2 percent (in military spending) and I guess he’s not happy about it.” Then he canceled a scheduled press conference saying he was flying back to Washington, D.C.

Trump may be pissed about it the whole thing, but many on Twitter are delighted…

The fabulousness of Justin Trudeau drinking beer out of a stemless wine glass has not escaped me.

A) @JustinTrudeau is a fantastic Prime Minister. B) He didn't say anything that wasn't true C) He was not the only one speaking or the one to begin the talking and D) Not only couldn't I care less if Trump's FeFe's are hurt, I actually think this made me like Justin MORE #Trudeau

In a complete reversal of his policy, Trump is now focused on a Northern Border Wall, to keep Justin Trudeau out.