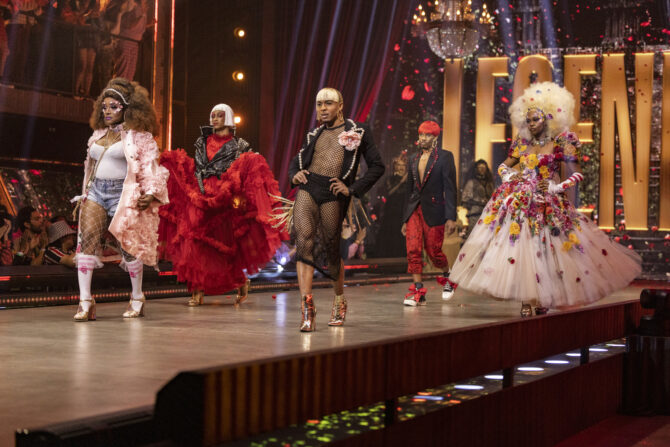 Since it hit HBO Max in 2020, Legendary has been helping bring ballroom excellence to the world stage. Along with things like foundational text Paris is Burning and hit series Pose, Legendary is another scratch at the surface of the Black queer-originated space that is the ballroom scene.

Legendary reached its finale this week and the Superior House is no surprise. After winning five of the nine episodes leading up to the finale, the House of Juicy Couture were destined for the grand prize.

Looking at Juicy Couture’s iconic, scream-inducing performances all season, it’s clear that their finale spot is well-deserved. Here’s a trip down the best of Juicy Couture this season.

Juicy Couture had fine showings in their Grand March and Animal Queendom performances, but the way they slayed the Whorror House ball in episode four woke the girls UP. The Freddy Krueger voguers crawling out from under the bed, the hand performance with Kruger blade-gloves (complete with slicing sound effects), the extending sweater sleeves?? It was all just too major.

Where a lot of houses went an ordinary spy/mafia direction in episode five’s “Mission Impossi-ball”, Juicy Couture’s sleuthing Pink Panther caper was a masterclass. The painting sliding by and producing the team’s other dancers one-by-one as the Panther vanishes into thin air is one of the most stunning displays in the series’ history. Just watching it back for this review is inducing chills.

The “Hot in the Shade” Ball

The House of Revlon tried to shade Juicy Couture a bit by making them have to vogue with a beach ball, but they didn’t count on DYU of Juicy Couture being the absolute secret weapon that he is (side note: this episode totally should’ve been The Beach Ball). Leave it to Juicy to bring another Black cultural reference like Jamaican Dancehall to an art-form already so steeped in culture. Not only was the concept on point, but the energy, the lyrics, the movement; everything was on a ten.

Probably the silliest ball of the season next to the Anime ball, “Slayground Playground” could’ve gone corny — lord knows it did for some of the other houses — but naturally, Juicy Couture put their entire merry go-round off in this performance. The second Brooklyn comes in as Wondergirl to save her teammate, it’s all over. There’s too many slick moves to name, but the split jump off of the see-saw was enough to make anyone stand up out of their seat.

Finally, we come to the “Hip Hopera” ball, the final main performance of the season. Juicy had all but secured the top spot after their incredible season, so this ornate Catholic-inspired show was basically a victory lap. If the habit-clad choral quartet singing “Juicy” in harmony wasn’t enough, the “take off your robes” turn (hopefully a nod to Sister Act 2) into a dance breakdown was it. The episode still had five categories to go after this, but there was no question who was taking home the trophy.