Saget died suddenly on January 9 at age 65, and authorities have claimed there was no evidence to support a drug overdose or foul play as the cause. But Newsweek reports that didn’t stop YouTuber Josh Pray from posting a video on Facebook implying that Saget’s death, along with that of White and Poitier, all stemmed from vaccination against COVID-19.

One commenter on Pray’s video wrote: “Wellll many directions we can go with this, but I will take jab for $500 Alex.” 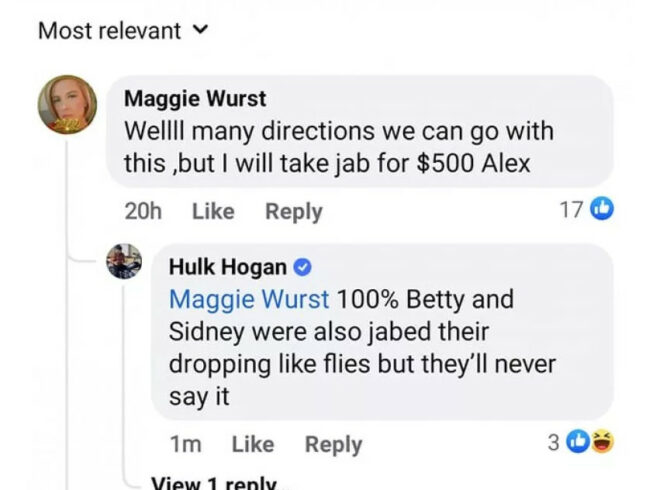 That’s when Hogan decided to weigh in on the issue.

“100 percent Betty and Sidney were also jabed [sic] their dropping like flies but they’ll never say it,” he commented on the video.

The pro wrestler subsequently deleted the comment, though screenshots of it continue to circulate on social media.

Needless to say, Twitter has weighed in on Hogan’s anti-vax stance, with users expressing their skepticism at his expertise…

Kinda funny a guy who took copious amounts of steroids for years is #antivaxx !!?? #hulkhogan https://t.co/lv3fA816rw

Hulk Hogan is anti-vaccine? Next you're gonna tell us the Ninja Turtles are climate change deniers, and ruin our whole childhoods.

Hulk *Hogan is anti-vaxx, thus continuing the trend of steroid enthusiasts worrying about the possible adverse effects of a life-saving vaccine. Cool.

I wake up to find out Hulk Hogan is not down with getting vaxxed but he’s been fine with shooting up roids for years. pic.twitter.com/2PIjdZzmmX

So Hulk Hogan believes a 94 year old and a 99 year old both died because they took the vaccine. That's about as believable as thinking he got huge muscles from taking his vitamins and saying his prayers ???? 94 & 99! If the vaccine caused them to die then I hope I make it that far.

Moreover, given that the CDC reports that over 247 million Americans are fully vaccinated against COVID-19, suggesting that any “deadly conspiracy” would have to be far more reaching than just three people, all of whom happen to be celebrities.