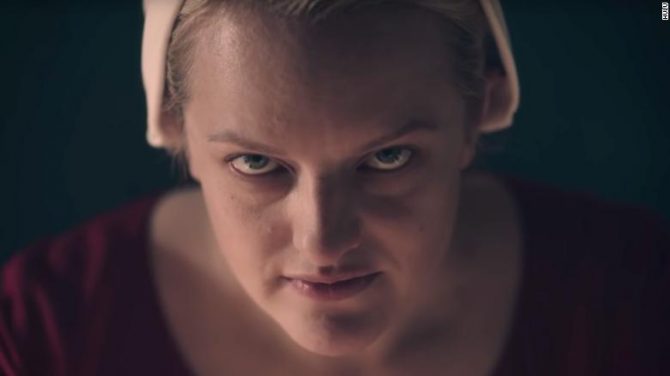 Sound the alarm, there’s been a breakout.

A breakout hit, that is. Sorry.

When we last left Hulu’s Emmy Award-winning series Handmaid’s Tale, the show’s protagonist, Offred, decided to forego her own breakout from totalitarian dystopia Gilead in order to fight from within the system.

It was a devastating moment for fans of the show, having watched Offred, played by the brilliant and uncomfortably-Scientologist actress Elizabeth Moss, endure one brutal hardship after another, but certainly a good one in terms of setting up season 3.

Related: Elizabeth Moss Is A Scientologist But She’s Not Down With Homophobia

Now Hulu has released a trailer for the upcoming third season, and the stakes are higher than ever. They were pretty high before, so that’s saying something.

The show, based on Margaret Atwood’s 1985 novel of the same name, imagines a world where reproductive rates have plummetted, prompting an ultra-religious overthrow of the United States. Among the many ways the new society limits personal freedoms are strict and often capital punishments for LGBTQ people and women. It’s not a cute scene.

Watch below, because we need one more reminder that the future is uncertain and potentially dark:

Blessed be the fight. The Handmaid’s Tale returns to Hulu on June 5.