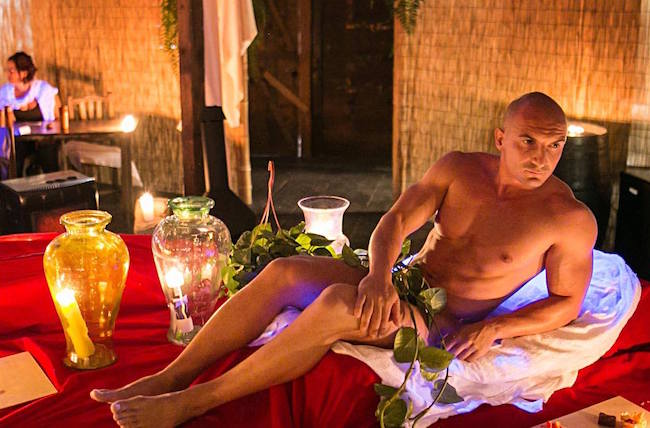 If you’ve ever been chomping on your five-spice sea bass (with tamarind citrus buerre-blanc sauce) and thought to yourself, “Tasty — but it would be so much better if I were completely nude,” we have good news for you.

This week, an eatery called Innato opened up in the Canary Islands in Spain, and it’s a completely nude restaurant.

Related: Iconic Clothing-Optional Bar In New Orleans Ends Its Nude Policy After A Customer Gets Raped

What does that mean? It means leave those clothes and inhibits at the door, and stop asking so many goddamn questions.

According to The Daily Express, customers are asked to check their smartphones, and then they’re led to a changing room.

Unutterably nude, diners then venture to their tables to soak in the “orgasmic atmosphere,” according to owner Tony de Leonardis (who was inspired by the hugely popular nude pop-up diner that descended upon London last summer.)

Certifiably sexy bamboo partitions section off the tables, so diners can enjoy their nude meal without fear of being seen by other diners enjoying their nude meal. Which isn’t weird.

There’s only “the odd fig or vine leaf to cover their modesty”.

Once you’re full (and still naked, because it’s an all-nude restaurant and so you, yourself, will be naked and eating), you can enjoy the “Happy Ending,” a dessert of drizzled melted chocolate and strawberries that will go straight to your naked hips.

And please don’t miss out on the “Pulp Fiction” (not “Friction,” wtf?), which includes octopus, Olindo lobster, potato, and paprika, with lobster mango, mustard, and brandy.

According to local Spanish media, the diner has already “revived people’s love lives,” which we suspect is a lie or at least an alternative fact.

So, to sum up: naked restaurant.

Wonder if they offer takeout.