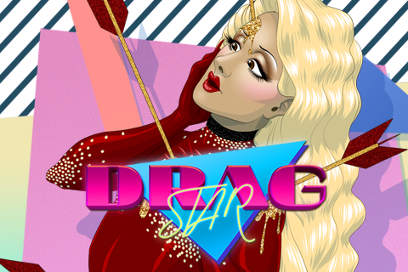 Question: What do you get when you combine the drama of RuPaul’s Drag Race with the excitement of a Choose Your Own Adventure novel?

Released in March 2018 by Choice of Games, Drag Star! is a new interactive RPG novel that allows players to compete against a diverse cast of drag performers.

Users have complete control over themselves–and the story: They can choose their own drag name, catchphrase, gender, pronoun, and can even determine the level of drama (or lack thereof) through various storylines.

In other words, it’s the perfect thing to whet your appetite until the next episode of Drag Race.

Queerty recently sat down with the game’s creator, Evan J. Peterson, who identifies as gay and genderqueer, to discuss his inspiration for Drag Star!, what he thinks of all the trolls giving it 1-star reviews, and how it compares to RuPaul’s Drag Race.

Thank you! It’s the longest thing I’ve ever written. My last book, The PrEP Diaries, was about 56,000 words.

Drag Star! has been described as an “interactive novel” and the first ever drag RPG game. What inspired you to create it?

I was recruited at World Sci Fi Con by Mary Duffy, my editor at Choice of Games. Their apps and online games are interactive novels and RPGs simultaneously. Originally, I was going to write a werewolf-themed horror game, but I scrapped that when the inspiration hit me for Drag Star! I couldn’t delay it.

The characters kept me inspired. I love these folks I created. Trigga Warning and Dorian Slay are favorites. I had a goal to produce 1,000 words per day, which I met or exceeded a lot of the time. Not only did I need to produce that many words for a full storyline, a lot of the content is parallel, so there are many versions of major scenes and decision paths. Players and readers have to play multiple times to get varying storylines.

Is it safe to assume you are a fan of drag?

I love drag. I used to be a club kid in Miami and I’d see people like Power Infinity and Daisy Deadpetals and admire them. I had a drag character as a young adult: Roxy Roadkill. She was glam/punk. These days, I’m just gender fluid, and proper drag is too time consuming. I’d rather be writing [Laughs].

In writing this game, I did some extra homework on drag history. I knew about Marsha P. Johnson and Pepper LaBeija, but not Sylvia Rivera. I wanted this game to celebrate drag beyond the current Drag Race phenomenon, but I do watch RuPaul’s Drag Race religiously.

That was another challenge: make these characters and their competition significantly different from Drag Race, but still have enough similarity that players and readers can have an approximate experience. There’s a lot that fans wish the show would include (or exclude), and I wanted to give my own fans and readers that experience. I worked hard to spoof that show lovingly without infringing on [it].

Despite dating a semi-retired drag queen (the sexiest, most precious one of all!), I know next to nothing about drag, but still had a ton of fun playing Drag Star!. It made me LOLZ several times. Obviously I chose Llama Del Rey as my drag name, LiLo for short.

Thanks! One of the first things I noticed about it was that it goes far beyond simply drag queens. Folks can choose to be a drag king, a nonbinary or genderfluid performer. People can also choose their preferred pronouns.Was this an intentional choice on your part?

It’s very intentional. For one thing, I want everyone to be able to play this game and feel the fantasy, regardless of their gender and sexual orientation. It’s more fun if we have queens, kings, and fluid and enby performers all in the same game.

Choice of Games is quite particular about letting their players choose gender, sexual orientation, and other demographics, so I wanted to honor that while expanding on it. By the time the game came out, RuPaul was “allowing” post-transition women contestants on her show, but that’s been a controversy until very recently. On my show, you just come as you are–or aren’t–and what matters is that you’re fucking fabulous. Your body parts are no one’s business but your own.

How have people been reacting to the game?

I’m so glad that people love it. The reviews are overwhelmingly positive. I always look for the common statements; with The PrEP Diaries, people consistently talked about how well it’s written, even if the content was too much or not enough for them. With Drag Star!, people consistently say it’s laugh out loud funny and just plain fun to play. That’s the best compliment they can give me: this game is fun. Achievement: unlocked.

I heard people were already starting to troll the game days after the release.

Oh, they were trolling the day it came out. There were statements like “drag is disgusting,” or that this was “forced diversity,” and someone else wrote that the game was literally gay. One person, bless their little heart, even wrote that homosexuals commit most acts of child molestation.

I know for a fact some people are rating the game without playing it. The fans saw all of this and they just steamrolled the trolls with positive feedback and flagged all hate speech in the reviews. It’s currently at 4 out of 5 stars on Google Play and 4.7 out of 5 on the app store. So, you know. Eat me.

How do you usually handle the negative reviews, in particular?

I’ve grown a thick skin, and most bad reviews online are ad hominem–they attack identities instead of ideas. Anyone who thinks my game is too gay is proving why it’s needed in the world.

Finally, what do you hope people get out of the game?

Honestly, I mostly hope [people who play it] have fun, and get to do and see all the things they aren’t getting from other drag media.

Drag Star! Is now available to play online, on Steam, and for iOS and Android. For more information on how to play, go HERE.