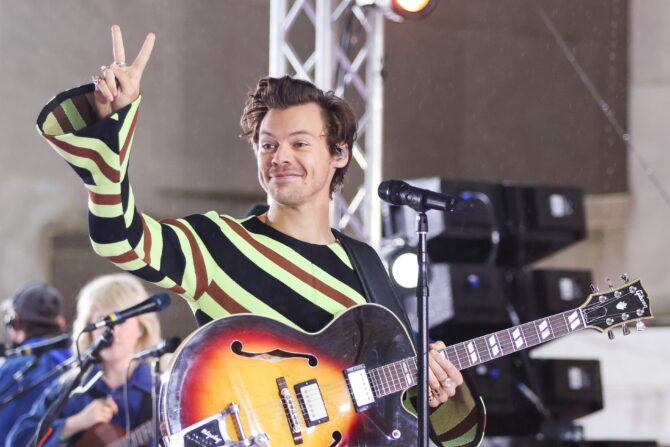 From the swoopy early-Bieber-esque hair and skinny jeans of the One Direction era to custom Gucci jumpsuits in every color of the rainbow, Harry Styles has gone through one of the most epic style evolutions this decade has seen.

The English singer/actor has seemingly donned every look imaginable in the realm of nouveau glam rock, but he’s also been known to dabble in dandyish, fruitcore, and gender-fluid aesthetics. He’s a bit of a style chameleon in that sense, able to pull off anything from a (relatively) lowkey shirt-jacket-jeans combo to a full-on body suit bedazzled for the gods.

Here, we highlight some of the most iconic Harry Styles outfits ever to grace the stage, red carpet, and wherever else the artist has strutted his stuff – plus some pieces that can help you get close enough to the real thing.

Channel your inner Styles with these nine great looks.

Upon the release of his first solo album, Styles also debuted his new signature style at that time: structured suits in floral and 70s-inspired prints. Perhaps the best iteration of this aesthetic is this wool and silk Gucci Aria suit he wore to the 2021 Brit Awards. To complete the look, Styles carried around a beautiful brown purse – a subtle yet chic reminder of his affinity for gender-bending accessories.

2. The 2020 Brit Awards Ensemble That Had Us Clutching Our Pearls

Speaking of gender-bending accessories, who can forget this understated chocolate brown suit and lavender sweater combo from Styles’ 2020 Brit Awards appearance? Though relatively simple in comparison to the other outfits on this list, this look is iconic for its great use of color and texture combos, as well as the classic pearl necklace draped over Styles’ collar.

Styles has had a lot of iconic sweater vest looks in the past years. He’s even been credited for being one of the major trendsetters to bring back the look. But it’s this Lanvin navy and white sheep-printed sweater vest – paired with a striped collared shirt, navy pinstripe pants, and pink loafers – that really had fans howling for more. Eagle-eyed style experts pointed out that Styles’ choice of sweater was an unexpected callback to a gorgeous red sheer jumper Princess Diana wore in the 80s.

The Lanvin vest is, sadly, sold out. But if you want to cop the look, this Etsy shop sells a hand-made merino wool replica for $83.30.

With song titles like “Kiwi”, “Watermelon Sugar”, “Cherry”, “Grapejuice”, it’s clear that Styles sure loves his fruits. In true fruitcore fashion, Styles showed up to The Howard Stern Show in May 2022 in a Gucci strawberry-printed shirt, acid green slacks, and a green beaded necklace.

While not quite the same thing, this pineapple pattern sweater vest from Shein lets you channel two popular Styles looks in one go.

5. Pink As A Flamingo At Coachella

Styles brought disco to Coachella this year as he rocked the stage in some bold looks, including this pink cowboy-inspired ensemble that would give Dolly Parton a run for her money.

His getup consisted of a custom Gucci vest and hot pink pants – the latter of which were emblazoned with the singer’s initials in silver letters in the rear. To complete the look, Styles donned a big furry pink coat and silver boots. Yeehaw, disco cowboy.

If you’re not quite confident that you can pull off hot pink metallic pants, try these bright pink painters pants from 5:31 by Jerome LaMaar.

6. Boas At The Grammys

At the 2021 Grammy Awards, Styles slithered onto the red carpet dressed in a yellow plaid blazer, another sweater vest, bell-bottom trousers, and a furry purple boa. Keeping in theme, Styles brought out another boa – this time green – for his performance later that night, paired with a form-fitting black Gucci leather suit.

7. Sheer And Sexy At The Met Gala

Styles brought camp to the pink carpet at the 2019 Met Gala with his show-stopping sheer Gucci ensemble. This lacy black outfit consisted of a frilly sheer top (#FreeTheNipple), black trousers, and chunky heels, topping it off with a single pearl earring dangling from his right ear. The look was something out of a gothic fairytale – if fairytales were risqué, that is.

Cop the look with this sheer lace shirt from Saint Laurent. If you’re on a budget, ASOS also sells a beautiful sheer shirt with ruffles for just $34.

Harry Styles inducted friend and idol Stevie Nicks into the Rock and Roll Hall of Fame in 2019 in a look that was just perfect for the event. Rocking a big, electric-blue corduroy suit and a plain white vest, Styles looked like he’d been plucked right out of the ‘70s rock scene.

For the album cover of Harry’s House, the singer went for a completely new look in head-to-toe Molly Goddard. The outfit consisted of a featherlight linen shirt with embroidered pink stripes and loose-fitting flared jeans. The toned-down look matched the slick and easy vibe of Styles’ third album, while still maintaining that familiar playfulness with gender in fashion.

Style experts have pointed out that Harry’s choice of baggy jeans is, as expected, on-trend. Vogue predicts that Y2K-style “elephant jeans” are set to make a comeback this year.

Get the look with Acne Studios’ flared ruffle wool and mohair-blend trousers.

While we could go on and on about Harry Styles’ fashion sense, these nine outfits are some of the most iconic looks he’s ever rocked. From psychedelic chic to sheer and sexy, Harry has never been afraid to push boundaries with his style. What will he come up with next? We can’t wait to find out!

RELATED: Harry Styles will go gay sooner than expected with ‘My Policeman’ premiere date bumped up