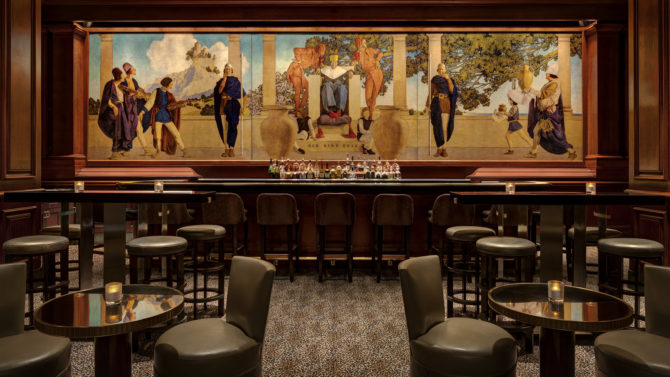 The iconic King Cole Bar at the St. Regis New York is fighting a lawsuit filed by a man who claims he was discriminated against for wearing women’s clothing by a manager at the establishment.

Plaintiff Andy Simon describes himself as “an openly gay black man of West Indian descent.” In his lawsuit, he says he arrived at the King Cole Bar one evening last September looking fabulous in a flowy black Givenchy shirt, Alexander McQueen shoes, and a Rick Owens scarf. He was also carrying a lady’s clutch purse and his face was painted with cosmetics, including foundation and mascara.

Related: Bartender at swanky NYC restaurant sues after being written up for looking like a ‘fa*got’

After sitting down and ordering a drink, Simon claims the bar manager approached and demanded that he immediately leave without giving any explanation as to why.

The lawsuit states: “When Simon expressed confusion as to why he was being asked to leave the bar manager had members of the security staff and the secret service approach Simon and escort him out of the building, humiliating Simon in the process.”

“Their thinking was that Mr. Simon was removed from the hotel because he was not appropriately dressed,” his lawyer, D. Christopher Mason, tells Law360. “The St. Regis had a sign saying ‘appropriate attire required,’ but they had no written dress code. They were the sole judge as to what would be considered appropriate attire.”

When Simon returned about thirty minutes later wearing a men’s tuxedo, he says was not bothered again by the manager or the bar staff.

The next day, he emailed another bar manager. The manager invited him in for a meeting where they reviewed surveillance footage from the previous evening. The footage showed Simon being asked to leave and then escorted out by security.

Afterward the meeting, the bar manager apologized in writing and offered Simon a free drink and free lunch to make amends.

Simon initially filed a complaint with the New York State Division of Human Rights back in January. It was dismissed in July for having no probable cause to prove discrimination. This week, Simon filed a petition to have the division’s determination reconsidered. He is also seeking an award of attorneys’ costs and fees.

The St. Regis Hotel has not issued a comment on the matter. A representative for the Division of Human Rights also declined to comment, saying that the division does not talk about pending cases.