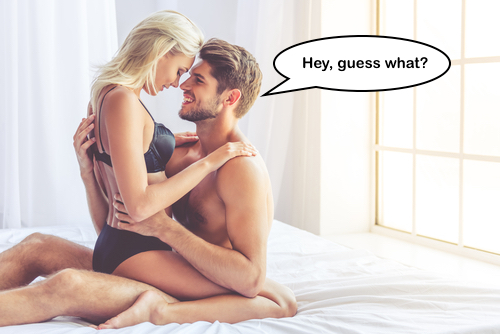 A 31-year-old man with a wife and 3-year-old son is finally able to face the truth: he’s spent the majority of his life denying the fact that she’s gay.

What he’s having a harder time doing is working up the nerve to come out to his wife.

“I’ve been working with a therapist on this, and on Friday, I came out to my brother and his girlfriend,”axlroxdotcom writes on Reddit. “They were both super supportive and definitely helped me feel like I am ready to have that talk with my wife.”

He’s written a letter that he wants to read to her, but he keeps getting The Fear:

“The past two days I’ve spent telling myself  ‘tonight is the night,’ but once our son is in bed we’re both exhausted, and I just can’t bring myself to do it…. Any words of wisdom would be so appreciated. I know I just need to pull the trigger, but in the moment I get scared and freeze up.”

Related: This 17-year-old came out to dad — who confessed he’s gay, too. Do they tell mom?

Other Redditors have been fast to offer their advice:

“There’s never going to be a good time to have this conversation,” says biocomputation.

“What you might keep in mind, and you’ve probably thought about it a lot already, is the fact that your wife deserves to be in a relationship with someone who can give her what she needs.

Every day that you don’t tell her is another day that she can’t move forward. None of us get those days back, so the sooner you tell her, the better.”

“Just wanted to let you know that you’re not alone and there are other people going through this,”Throwaway123gay tells him.

“It’s going to really suck when you tell your wife, but it will be better eventually. Be as compassionate and as honest with her as you can. I wouldn’t immediately bring up divorce, but instead suggest couples counseling to figure out where you want to go from here.”

CountryPA advises: “If you can’t say it out loud, just leave the note somewhere she will find it after your son is in bed. And be prepared any reaction from your wife.

“You are the man and you can do this. Once you are out to your wife, this huge burden will be off your chest.”

However, jmat83 disagrees: “My advice is to practice what you want to say, but have the letter in your pocket when you tell her so if you get tripped up in the emotion and need help to proceed, you know it’s right there and you can take it out.”

“Doing it in person, verbally, from the heart is the way to go, and if you need to take the letter out, it comes off as caring enough about her and what you need to say that you wanted to get it right instead of distancing yourself from what’s about to happen by just letting her read it and having her deal with it on her own.”

Have any of you been in this situation, or know somebody who had to face this scenario? What advice would you offer this man? Sound off in the comments below!