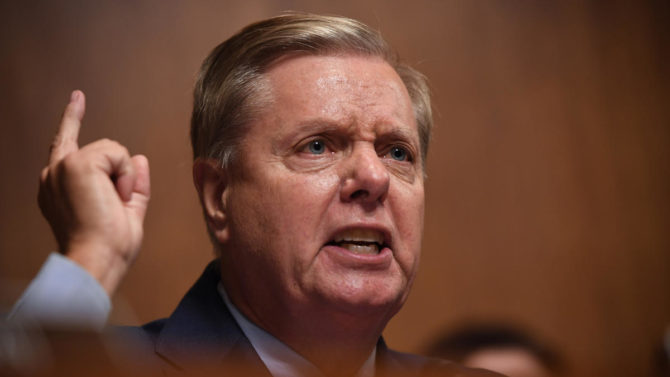 Lindsey Graham is hitting back at Chelsea Handler after she insinuated he’s gay on social media last week.

It all started when Handler posted a tweet on #NationalComingOutDay tweet cracking a gay joke at Graham’s expense.

“If you’re wondering why Republicans took a sick day today, it’s probably because it’s #NationalComingOutDay,” she wrote. “Looking at you @LindseyGrahamSC.”

If you’re wondering why Republicans took a sick day today, it’s probably because it’s #NationalComingOutDay. Looking at you @LindseyGrahamSC

Over the weekend, TMZ caught up with Graham at Reagan National Airport and asked him about the remark.

Whilst sipping a sweet tea from Chick-fil-A, the 63-year-old lawmaker brushed off Handler’s remarks, saying “it’s a free country” and “she can say what she wants to say. I don’t care.”

“I don’t think much about what she says at all,” he adds. “If she wants to live her life that way, that’s up to her. She knows zero about me.”

Then, just to clear up any confusion, he added: “To the extent that it matters, I’m not gay.”

Graham added that he does not think the comments “reflect well” on Handler and that “belittling people is not as funny as it used to be.” To which, our only response is this: