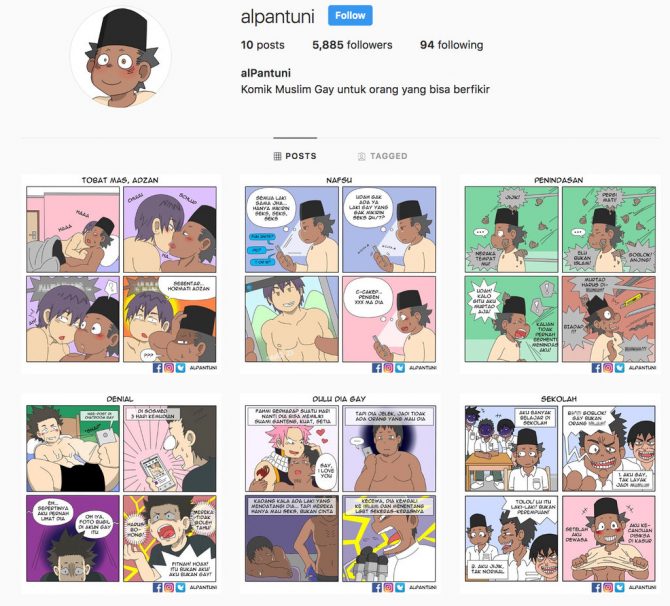 Controversy has erupted in Indonesia after the mysterious disappearance of a series of comic strips about gay Muslim characters from the social media site Instagram.

The account was deleted Wednesday, just days after officials within the Indonesian government threatened to block all of Instagram should the comics remain online. The brainchild of a user named @alpantuni, the comics depicted the cartoon interactions of gay, Muslim men. Though they did show shirtless men in bed together and kissing, they did not ever show graphic sex or nudity–generally the line at which art is deemed pornographic.

In Indonesia, a nation where 90% of citizens identify as Muslim, the takedown of the comics has met with widespread acclaim. “God created humans as man and woman, a couple, and there is no third sex,” said Muhyiddin Junaidi in an interview. Junaidi is a representative of the Council of Ulemas, a quasi-governmental body of Muslim scholars. “For us, being L.G.B.T. is a psychological illness that needs to be cured, and this comic is promoting it,” he added. “That will ruin the people’s faith in the long term.”

Though Indonesia has long played host to an active queer community, since 2016 the government, lobbied by conservative Islamist groups, has begun a widespread crackdown on the LGBTQ community. The country has begun widespread arrests and severe punishment for citizens engaged in conduct deemed “homosexual.” In 2017, for example, Indonesian courts sentenced two men accused of having gay sex to 85 lashes in public.