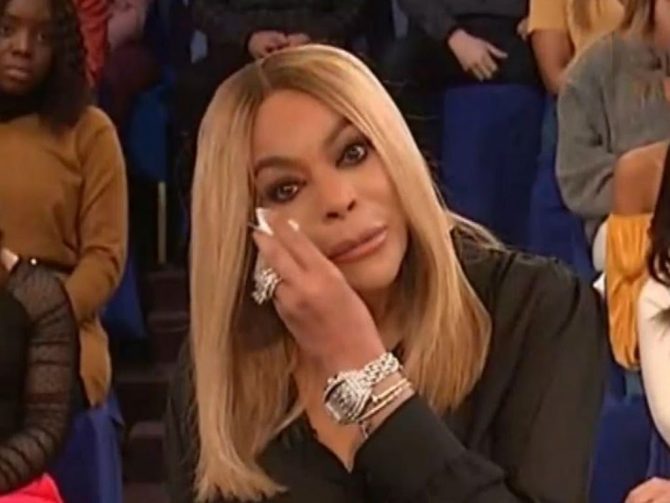 What a girl wants depends on the girl, and what Wendy Williams really really wants is as obvious as the Trump administration’s anti-LGBTQ agenda: She wants traditional gender roles. She wants to wear men’s shirts, short skirts, to color her hair, do what she dares. She wants a man who makes her feel like a woman.

But then, who needs men at all on Galentine’s Day? During the February 13 episode of her eponymous daytime talk show, Wendy explained the Parks and Recreations twist on Valentine’s Day – ”It’s women going out, getting saucy, and going back home” – before swerving right and going totally tone deaf.

After admonishing the men in her audience for applauding Galentine’s Day, she went all in. “You’re not a part,” she said. “I don’t care if you’re gay. You don’t get a mensie every 28 days, alright.”

Fair enough. But she didn’t stop there.

“You can do a lot that we do,” she continued. “But I get offended by the idea that we go through something you will never go through. And stop wearing our skirts and our heels. Just sayin’, girls. What do we have for ourselves? … Look here now, gay men, you’ll never be the woman that we are. No matter how gay.”

So that’s what she thinks of us? Wendy must hate drag fashion, Pose, and Billy Porter’s red-carpet looks over the last year. There also appears to be some pent-up resentment for gay men. She thinks we’re culturally appropriating womanhood and we want to crash Galentine’s Day – as if there’s a gay man alive who would choose a gaggle of gals over a sexy stud on Valentine’s Day. Come on, Wendy.

Naturally, social media lit up with folks who lost their minds, prompting Wendy to backtrack.

“I’ll start by saying, ‘I apologize,'” she said in a video she shared on social media the next day. “I did not mean to offend my LGBTQ plus community on yesterday’s show. I did not realize until I got home and I watched the second running of our show. … One thing that I can tell you right now is that I never do the show in a place of malice. I understand my platform with the community. … I didn’t mean to hurt anybody’s feelings. I’m just having a conversation.”

She continued: “I’m 55 years old, and maybe I sounded like your auntie, your mother, your big sister, or somebody out of touch. I’m not out of touch, except for, perhaps, yesterday, by saying what I said. So, I deeply apologize, and I deeply appreciate the support that I get from the community. I will do better. I appreciate you supporting me. Thank you.”

A message from Wendy. pic.twitter.com/aEpMvubJVJ

Apology accepted, but as Maya Angelou once said, when people show you who they are, believe them the first time. And this isn’t the first time Williams has shown us who she is while inserting her foot squarely into her big mouth. Last month, she apologized for mocking cleft palates while talking about the scar above soon-to-be Oscar winner Joaquin Phoenix’s upper lip. Why did it take social media outrage to show her the error of her uncensored ways?

Why did did she have to go home and watch her February 13 show to realize what she said on it about gay men was garbage? Being sorry doesn’t necessarily mean she wasn’t speaking her truth. If she has any gay friends (and I’m not convinced she does), she’s probably the kind of Grace who barks “He’s straight!” whenever one of them encroaches on her turf by complimenting a heterosexual man’s looks.

As with someone who lets the N-word slip and then immediately apologizes, contrition doesn’t equal “That’s not how I actually feel.” If her words did indeed reflect what’s still in her head, Wendy is pathetically mistaken. First off, to be gay is not to want to be a woman. We don’t all wear skirts and heels, and we certainly do not all sit around wondering why girls have all the fun.

Furthermore, there are plenty of presumably straight men who dress up in women’s clothing, including Harry Styles, the rapper Offset, and, in a recently leaked photo shoot, Snoop Dogg’s 22-year-old son Cordell Broadus. By denouncing cross-dressing and then equating it with gay men, Wendy damned two groups with one rant: men who like to look pretty, regardless of their sexual orientation, and those who fit the more stereotypical notion of gay men.

Her comments also were shockingly transphobic. Does she really think getting to wear uncomfortable articles of clothing is the reward women get for enduring menstrual cycles? What about trans women who don’t have periods? Should they be doomed to wear flats and pant suits only? Does Wendy not realize that womanhood isn’t defined by attire?

Apology aside, this is not the first time Williams has expressed such narrow views on gender. She’s always openly valued men’s men over all other types. Last November after People magazine anointed John Legend the new Sexiest Man Alive, Wendy said, “When I think about a sexy man, I’m not thinking about John Legend, only because the first thing I think of is, I weigh so much more than him. If we were walking down the street and someone wanted to spray me with a water gun, I need a man who’s going to punch someone in the face.”

It was almost a tacit endorsement of the type of man who made #MeToo necessary. Although social media didn’t call her out, she showed her true colors: “Real” men are big, macho, and quick to fisticuffs. Now, by making her distaste for men in skirts and heels all about gay men, she’s shown her secret disdain for a significant portion of her fan base.

Gay men and the trans community already have enough to deal with as conservative political leaders attempt to strip away our rights. The last thing we need is someone with Wendy’s influence perpetuating the outdated stereotypes that homophobes wield against us.