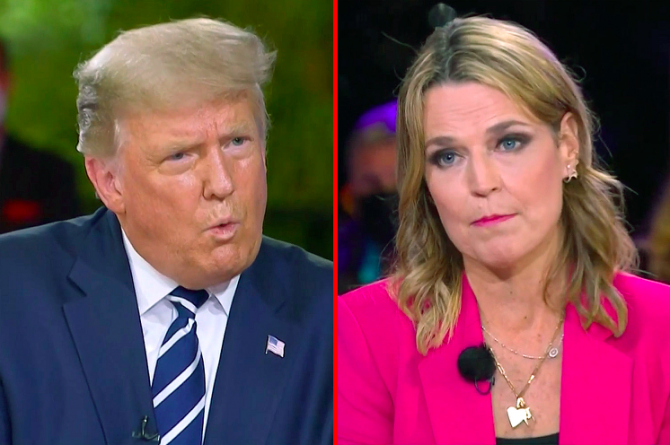 In case you missed it, and we certainly don’t blame you if you did, most of the evening was just Trump shouting over Guthrie with more of his usual nonsense and lies.

The highlight of the event, however, came when Guthrie challenged him for retweeting a conspiracy theory that President Barack Obama ordered the murder of SEAL Team 6.

When Trump claimed that all he did was “retweet” the conspiracy theory, Guthrie replied, “I don’t get that. You’re the president. You’re not, like, someone’s crazy uncle who can just retweet whatever.”

To which Trump answered, “Frankly, because the media is so fake and so corrupt, if I didn’t have social media–I don’t call it Twitter; I call it social media–I wouldn’t be able to get the word out. And the word is–”

Savannah Guthrie for the win.

Trump talking about retweeting conspiracy theories and Savannah nails him with a “You're not like someone's crazy uncle who can retweet whatever”… pic.twitter.com/P5kiywvTHR

And not long after that, #crazyuncle was trending on Twitter. Here’s what people have been saying…

NARRATOR: He is someone’s crazy uncle.

Savannah Guthrie just compared Trump to someone’s crazy uncle to his face. She is destroying him.

one small fact check for @SavannahGuthrie — he is, literally, someone’s crazy uncle

“After Savannah Guthrie compared him to a ‘crazy uncle who can just retweet whatever’ last night, Pres. Trump started his day by tweeting & retweeting more than 40 times before 8am, including an Onion-style comedy satire article that he appeared to think was true.” – @apiper13

“You’re not somebody’s crazy uncle.”
Mary Trump literally wrote a book about how he is her crazy uncle.

Savannah Guthrie last night: “You’re not like someone’s crazy uncle who can retweet whatever.”

Trump today: [Tweets parody article about Twitter shutting the site down to help Biden as if it’s real.] #CrazyUncleTrump pic.twitter.com/q5XqNxqdlO

“Savannah Guthrie” to Trump: You’re the President, you’re not some crazy uncle!

Bet your Crazy Uncle never suggested nuking a hurricane off the coast of the United States.#CrazyUncle #CrazyUncleTrump #SavannahGuthrie

Mary Trump: “I beg to differ.”