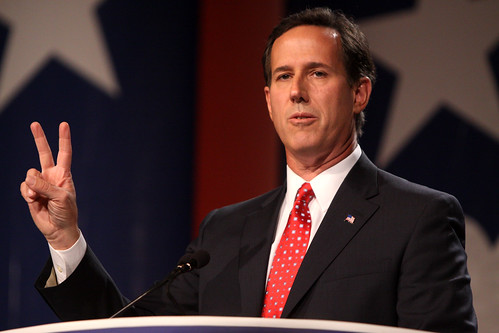 The slow-motion train wreck that is the Republican presidential campaign had its first vote last night in Iowa. In keeping with the tenor of the race to date, nobody won. Instead, the Iowa caucuses produced a three-way tie that leaves us with the following as the stars of the GOP firmament:

*Ex-Massachusetts governor Mitt Romney, who was for gay equality before he was against it and whose idea of personal integrity is to hold a position for 24 hours before flip flopping. (24.6%)

*Texas Congressman Ron Paul, whose libertarian beliefs allow for gay marriage but also institutionalized racism and sexual harassment and who has a history of putting his name on viciously homophobic rants. (21.4%)

Kind of makes you proud to be an American, doesn’t it?

What the Iowa caucuses did was make Romney’s road to the presidential nomination a bit bumpier, if still inevitable. The evangelical right finally decided to coalesce around a candidate and having run through everyone else, they finally settled on Santorum, second-to-none in his homophobia.

By just about every measure, Santorum has as much chance of winning the GOP nomination as he does of winning the Mr. International Leather, but he does have media-hyped momentum and vanquished his main rivals for the religious right vote: Rick Perry and Michele Bachmann, who were forgotten but not gone on caucus night. (But they are now.)

Lately Santorum’s been restyling himself as a populist conservative, largely by wearing sweater vests and talking about the impact of the l

ackluster economy on families who uphold his brand of family values. he might not not have much personality but, then again, his main opponent is called “human-like” in the press.

While Slick Rick might have room for growth, Ron Paul probably doesn’t: His fervent band of followers adore him but even Paul knows he’s never going to be president.

Which leaves Newt Gingrich, the self-appointed brainiac of the field. Gingrich’s odds were never great to begin with, but for a while he was leading in the polls. At 13.3%, his fourth-place finish didn’t finish him off altogether, but it did make him mad at Romney, for the millions of dollars in negative ads he spent in attacking Gingrich. Having Newt mad at you isn’t fun, as Bill Clinton can attest. Newt is going to bloody Romney every way he can now, which will be an entertaining sight at the very least.

Next up, New Hampshire, where Romney has to meet some pretty high expectations. It’s still his nomination to lose, but after Iowa that isn’t the slam dunk it once seemed.