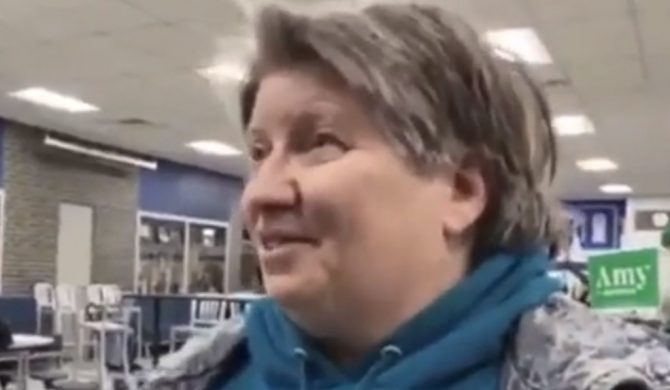 As the nation eagerly awaits last night’s results out of Iowa, one woman has become a viral laughing stock after voting for Pete Buttigieg and then trying to retract her vote after learning he’s gay.

The clip made its way around Twitter and Reddit early this morning. It opens with the unidentified woman–who, it should be noted, is wearing Amy Klobuchar buttons–shrieking “Are you saying that he has the same-sex partner? Pete?!”

Nikki van den Heever, a caucus precinct captain, does her best to stifle her own laughter as she answers yes.

“Are you kidding?” the woman asks in shock. “Then I don’t want anybody like that in the White House. So can I have my card back?”

van den Heever giggles as she says she would have to ask about giving the card back. She also tries to point out that Mayor Pete is just a human being, and that his sexuality shouldn’t be an issue.

“He better read the Bible,” the woman grumbles. “Why does it say in the Bible that a man should marry a woman then?” van den Heever and the woman exchange a few more remarks before the voter yells, “How come this is never been brought out before?!”

Mayor Pete Buttigieg is the first openly-gay candidate to seek the Democratic nomination for president. Throughout his campaign, he has acknowledged his sexuality, as well as his husband, Chasten.

Maybe this woman is just trying to gaslight us all?

#PeteButtigieg precinct captain in rural Iowa responds to a caucus-goer flipping out upon learning that he has a same-sex partner. It’s a masterclass in patience, persistence, and love. Bravo @nikkiheever #IowaCaucuses #cresco #howardcountyiowa pic.twitter.com/PhX7vRFh8X

Related: Pete Buttigieg declares victory in Iowa… but the jury’s still out