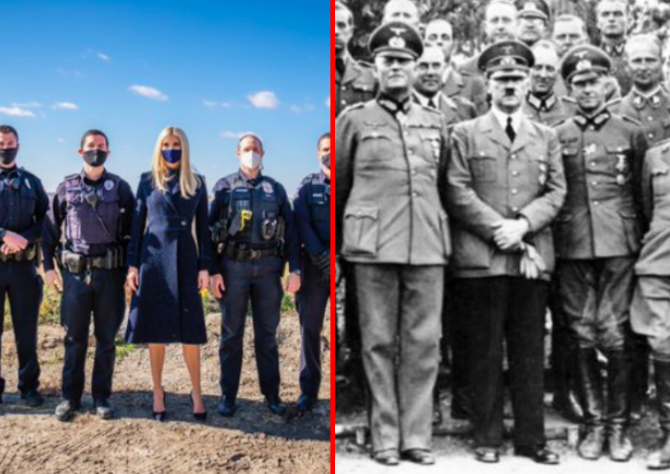 Eight police officers from Wisconsin may be out of a job after they voluntarily posed for a photo op with Ivanka Trump over the weekend.

On Saturday, the first daughter shared a picture of herself standing in the center of a group of uniformed police officers along with the caption, “Thank you Wisconsin!”

In Wisconsin, police officers are prohibited from participating in this sort of activity while on duty. The law specifically states:

No person holding any position in the classified civil service may during the hours when on duty engage in any form of political activity calculated to favor or improve the chances of any political party or any person seeking or attempting to hold partisan political office, nor engage in any political activity when not on duty to such an extent that the person’s efficiency during working hours will be impaired or that he or she will be tardy or absent from work. Any violation of this section is adequate grounds for dismissal.

All of these officers will be fired thanks to you pic.twitter.com/ViLVcmWYp4

Every one of these police should be fired if they knowingly intended to endorse the Trump campaign by participating in this photo.

Leaning hard into the fascism

As a resident of Wisconsin, allow me to say that you are not welcome.

The overt politicization of the police is a goddam problem.

Violating the law. The prohibitions in the Hatch Act specifically apply to officers or employees of any “state or local agency.” 5 U.S.C.S. § 1501(2). pic.twitter.com/99KQp6LAZi

This the new border wall? A Vapid dingus and a bunch of photo-cops?

Wow, what a beautiful photo of the rise of fascism in America! Stunning! So many horrible things to come! ❤️

I don’t understand how police departments paid for by our taxes can demonstrate partisanship by posing with the president’s daughter ahead of an election. Some days I wonder if the US is a democracy in name alone.

This is illegal. Every one of those cops need to be fired.

Are you being taken to prison??

Related: Everyone’s creeped out by Ivanka’s tweet about going to the Midwest to buy cheap crap made in China