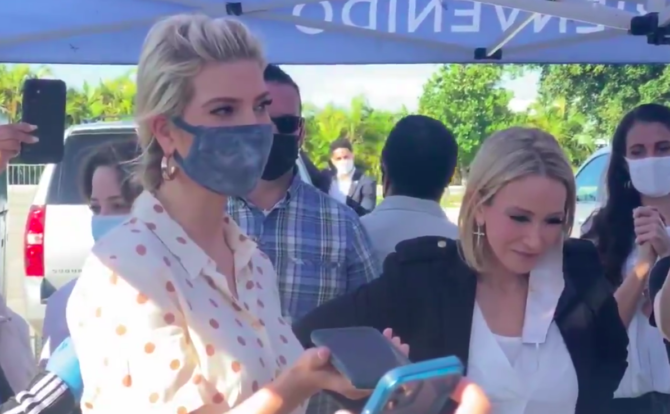 Unemployed? Starving? Need food to feed your family? Ivanka Trump is here to help! But first you must listen to her dad spew nonsense on speakerphone for a few minutes.

This morning, the first daughter was at King Jesus Ministry in Miami, Florida, where roughly 1,000 families showed up to collect boxes of food so they don’t starve this Christmas.

Toward the end of the giveaway, Ivanka, who recently paid almost $32 million for a plot of land on Miami’s Indian Creek Island, put her dad on speakerphone and made everyone around listen to him babble on and on before they could go home.

After wishing people a Merry Christmas, Donald Trump spent several minutes repeating his unsubstantiated claims that the election was rigged and he should be declared the real winner.

“It was a rigged election and we’re fighting it!” Trump boasted on the call.

Because that’s exactly what people need to hear as they head into their hungriest holiday ever.

Ivanka Trump puts her father Pres. Trump on speaker phone. He wishes everyone a merry Christmas and reiterates debunked claims about a rigged election. @WPLGLocal10 pic.twitter.com/pxyJQnWQ8n

Ivanka’s been on quite a roll lately when it comes to staging altruistic photo opps.

Last week, she shared a video of herself delivering boxes of food to starving Americans in Virginia set to inspiring violin music. And in July, she spent roughly 30 minutes handing out food to hungry families in Washington, D.C.

The awkward thing about her food giveaways, however, is that she never addresses the elephant in the room, which is that many of the people she’s feeding are hungry largely due to her father’s failed response to the coronavirus pandemic, which has led to record unemployment and a decimated economy.

One local media outlet reports that some of the people who received food today in Miami had been lined up since yesterday evening and slept in their cars while “waiting for the holiday treat.”