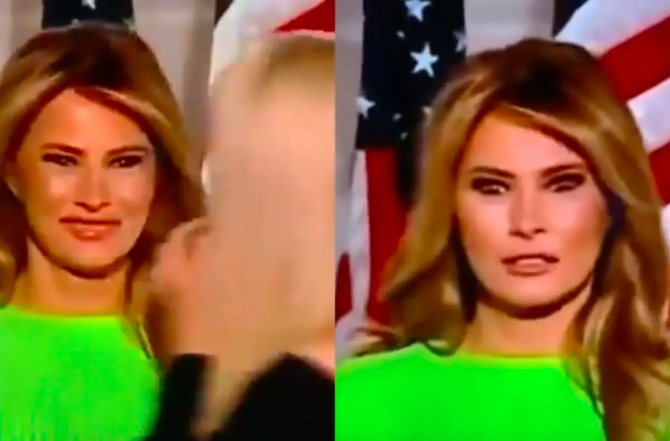 Another one of Melania Trump‘s former senior aides is speaking out about her other former senior aide’s new tell-all book that promises all sorts of juicy secrets, unflattering anecdotes, and other garbage about the ex-FLOTUS.

Speaking to Anderson Cooper on CNN last night, Melania’s ex-BFF/senior adviser Stephanie Winston Wolkoff was asked about Stephanie Grisham’s new book I’ll Take Your Questions Now: What I Saw in The Trump White House, which hits bookstores next month, and she has a surprising take on the matter.

(Side note: What’s with all these Stephanies?!)

“I have a hunch … this might be Ivanka’s next step for her bid for the White House,” Wolkoff said. “Having Stephanie Grisham do a little dirty work on Melania.”

So, Ivanka’s secretly using Grisham to trash Melania so she can run for president in place of her father? That sounds a little far-fetched to us, even by half-baked, hairbrained Trumpian standards.

“I don’t put anything past them, really,” Wolkoff affirmed, adding that Grisham was never installed in the East Wing “to have Melania’s back. Stephanie was there as an Ivanka loyalist.”

“Stephanie Grisham started out in the West Wing,” she noted.

This was so weird. #RNC2020 pic.twitter.com/YHReTl0bfT

Wolkoff went on to say that she doesn’t expect any new revelations or insight from Grisham’s book, saying that “Unless she’s had an epiphany of conscience, I don’t think there’s going to be anything really new in the book that we don’t already know.”

She also doesn’t think the book will help salvage Grisham’s tarnished reputation, which already wasn’t sterling before she hopped on board with the Trump campaign in 2015.

“As long as you go along with what they want you to say, and do, then you’re part of the Trump team. And that’s exactly what Stephanie did. It’s a little too late.”

As for whether the book will actually do any damage to the Donald Trump or his family, Wolkoff also has her doubts about that.

“You can be convinced. You can feel embraced by them. I mean, he’s very convincing to millions of people, obviously. And I myself fell for Melania’s friendship.”

The former adviser added, “I think that there’s a narrative that people follow, people want to hear, people want to see … They’re going to make sure, to keep going, as long as their base is following them, and say and do whatever it takes to keep them following.”

“Too many people are listening to the words they say, but not the actions they’re taking. And their loyalty only runs one way, and it only runs their way.”

"Unless she had an epiphany of conscience I don't think there is going to be anything really new in the book that we don't already know," says former friend of Melania Trump, Stephanie Winston Wolkoff of the the former White House press secretary Stephanie Grisham's recent book. pic.twitter.com/LEgosrSzKd