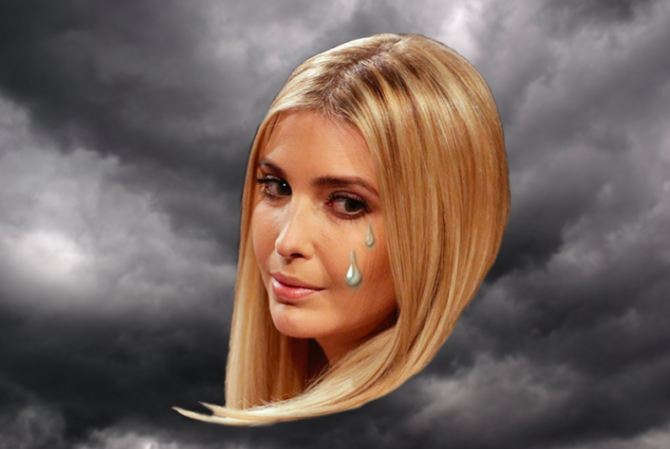 Ivanka Trump went on “Fox & Friends” this morning to whine about how mean everyone has been to her and her family these past few months.

“With all the noise, with all the intensity of media coverage and obviously what makes headlines, ultimately, we’re really focused on why the American people elected Donald Trump as president,” the first daughter said.

For the record: The American people didn’t elect Donald Trump to be president. The electoral college did. The people actually voted for Hillary Clinton, to the tune of 65,844,610 votes, three million more than Ivanka’s dad.

When asked whether it was hard to get things done with all the drama surrounding her pop’s first five months in office, Ivanka she she’s been “a little blindsided” by “ferocity” of the media.

Did you catch that, folks? Governmenting is totally intense. Who’da thunk?

She continued, “But for me, I’m trying to keep my head down, not listen to the noise and just work really hard to make a positive impact in the lives of many people.”

“At the end of the day, if you want to think about difficult, it’s the factory worker who’s been laid off. Difficult is the mother who lost a child to opioid abuse. So these are the real challenges and I think that does put it in perspective.”

Ivanka concluded the interview by saying the media is only after “salacious details” surrounding her family, but that she tunes out the nonsense by focusing on the work at hand.

“There is a 24-hour news cycle that gets fed by and is encouraged by lots of salacious details,” she says. “But at the end of the day, we’re all focused on the work.”

Related: The reviews of Ivanka Trump’s book are in, and they’re brutal