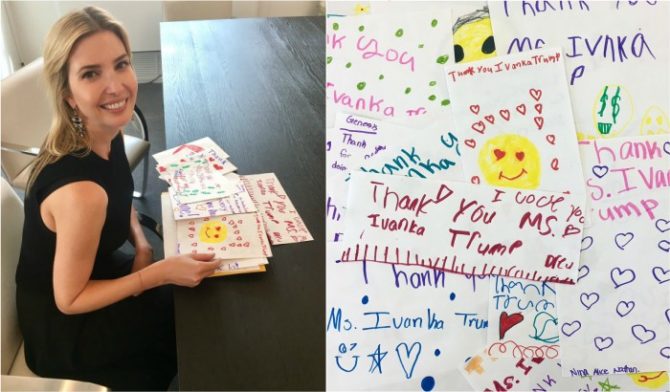 First Daughter Ivanka Trump tweeted a picture this week of all the “fan mail” she’s been receiving at the White House from school children all across the country:

Overjoyed by these beautiful letters. Reading them is one of the highlights of my week. ? pic.twitter.com/AF5tSMHnB6

“Overjoyed by these beautiful letters,” she wrote. “Reading them is one of the highlights of me week.”

The “beautiful letters” all seemed to be thanking Ivanka for something… though it isn’t entirely clear what.

Needless to say, not everyone shared her joy.

Check out some of the responses to Ivanka’s tweet…

Wow! How does @realDonaldTrump find the time to write so many letters!?

What do you actually do?

Your dad's handwriting has improved greatly!

Here are some other letters for you from your people @realdonaldtrump @POTUS Ivanka pic.twitter.com/4GaRHg8KbC

what are they thanking you for? and why are you in the WH again?

And all on the same paper, same smiley faces, same 'Ms. Ivanka', but no rationale for the 'thank you's'. So bizarre.

So now taxpayers are paying someone to sit and write fake kids'letters? God , you all need constant validation even if its fake. #LoserFam

Is it just me or do ALL of those look like they're from the same person? Did she pay someone to forge those? ?? wouldnt put it past that fam