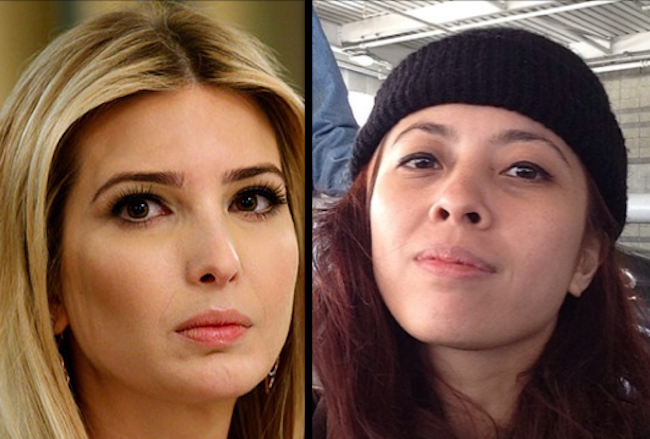 A freelance reporter on special assignment for IvankaTrump.com recently approached Dimayuga about interviewing her for the site.

Dimayuga gleefully posted screenshots of the exchange, including her altogether brutal (and beautifully written) rejection:

Had this message slide in my DM last week which had me screaming. Sent her this response today. #resist #fucktrump #dragher @dear_ivanka

“I would love to conduct an interview (via telephone/email) with you spotlighting your work as a strong female entrepreneur,” describing the site as a “non-political platform of empowerment for modern working women.”

Dimayuga wasn’t about to take the bait. She tells Huffington Post she worked on the response with her friend, the activist Shakriah Simley.

Thank you for thinking of me. I’m glad you are a fan of my work so much that you want to provide more visibility for my career to inspire “other working women.” However, I’m for women who actually empower other women.

I don’t believe that IvankaTrump.com is truly “a non-political platform of empowerment for [women]”. So long as the name Trump is involved, it is political and frankly, an option for the IvankaTrump.com business to make a profit.

I don’t see anything empowering about defunding Planned Parenthood, barring asylum from women refugees, rolling back safeguards for equal pay, and treating POC/LGBT and the communities that support these groups like second class citizens.

As a queer person of color and daughter of immigrant parents I am not interested in being profiled as an aspirational figure for those that support a brand and a President that slyly disparages female empowerment. Sharing my story with a brand and family that silences our same voices is futile. Thank you for the consideration.

And that, as they say, is that.

Out of bounds
27 comments