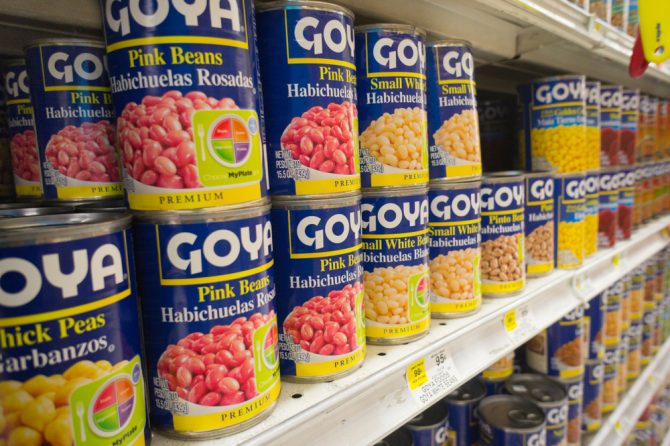 Mere hours after the disastrous launch of her #FindSomthingNew campaign, which aims to inspire the millions of Americans who have lost their jobs as a result of her father’s botched response to coronavirus to consider enrolling in community colleges and changing their entire careers, Ivanka Trump took to Twitter to plug… Goya beans?

A little backstory: The food company, which is the largest Hispanic-owned privately held business in the country, has been facing boycotts after CEO Robert Unanue praised Donald Trump in a Rose Garden event last week, saying the nation was “truly blessed” to have him as its leader.

Yesterday evening, the failed-handbag-designer-turned-White-House-advisor may have violated a federal ethics rule when she tweeted a picture of herself holding a can of Goya beans along with the caption, “If it’s Goya, it has to be good. Si es Goya, tiene que ser bueno.”

People certainly had a lot to say about the post…

Why is a senior White House official endorsing a food product?

This is a Hatch Act Violation. LOCK HER UP!

This family will sell ANYTHING

I imagine Ivanka sent her maid out to get this can as a prop.

I’m sure all the white supremacists who support your dad are grateful for the Spanish translation.

You do know you just violated the law, don’t you? And that the statute of limitations just started running today? And the next president will be in office in less than a year? And that if it’s not your dad, real prosecutors will enforce the law and fine you?
5 CFR § 2635.702(c)

83% of American Hispanics disapprove of your father. The Goya CEO had to fawn all over him, saying how “blessed” we are to have such a great leader. It was a stupid business move and now their will be economic consequences. No more Goya for my household.

Sure enough, then came the memes…

When you said to #FindSomethingNew, I really wasn’t expecting this. pic.twitter.com/KLr12c9Owc

“Daddy’s favorite book” says Ivanka Trump. “He read it to me every night as a child. He’s not a racist. It’s just a book.” pic.twitter.com/DDH2rXc0Xq

A spokeswoman for the first daughter was quick to defend the tweet, saying Ivanka was merely showing “personal support” for the brand and accusing the media of stoking “cancel culture.”

“Ivanka is proud of this strong, Hispanic-owned business with deep roots in the US and has every right to express her personal support,” White House spokeswoman Carolina Hurley said in a statement.