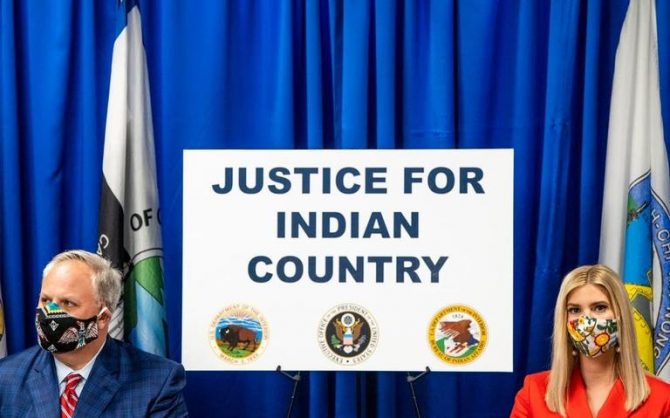 Ivanka Trump appears to have grown bored with her role as the White House’s official spokesperson for Goya beans, so she’s #foundsomethingnew.

That’s right, folks. The failed handbag designer is now a detective who specializes in homicides and kidnappings.

She also shared the news on Twitter, along with some truly alarming statistics about indigenous women:

Research shows that in the lifetimes of Native or indigenous women…
▪️34% are raped
▪️39% are victims of domestic violence
▪️2.5x as likely to experience violent crimes
▪️2x more likely to be raped or sexually assaulted compared to all other races

The Trump Administration in 2019 formed Operation Lady Justice, a long overdue federal task force that enhances the operation of the criminal justice system + addresses concerns of the Indian Country on missing and murdered people – particularly women and girls.

Today as we continue our steadfast efforts in supporting tribal communities, we opened the first ever U.S. Missing and Murdered Cold Case Office in Bloomington, MN which alone will serve 36 tribes throughout the Midwest.

While we certainly need to do more (much more!) for indigenous communities, it’s odd that Ivanka, whose father regularly uses of the term “Pocahontas” as a slur, suddenly cares so passionately about a group of people she’s never expressed any interest in before.

It’s even odder when you consider that, earlier this year, the Trump administration deliberately withheld $8 billion in coronavirus relief funds that had been promised to tribal governments under the CARES Act, and when it finally did release the funds, only about half the promised amount was sent, until a judge ordered the remainder be released.

Then there was the time in March, just as coronavirus was taking off in the United States, when the Trump administration revoked the reservation status of 300 acres of land belonging to the Mashpee Wampanoag, the tribe that first welcomed the Pilgrims to America in 1620, for no apparent reason.

We could go on and on (and on) about how the Trump administration has abused Native Americans, but, honestly, we’d be here all day, night, and into tomorrow.

Here’s how Twitter is responding to Ivanka’s new gig…

We know the statistics.
We live the statistics.
I just wonder if an entitled white woman can actually bring a voice and a heart to the table to change it or, if this is just more kabuki theater for your resume’.
None the less, we will see.

Tell us more about rape. pic.twitter.com/DrMqEyndQv

And that’s just the ones Trump had to have removed from his trip to Mount Rushmore.

You mean the same indigenous people your Dad ignored for a photo op at Rushmore? And had US MILITARY physically remove them?

The same people your Dad ignored during the initial C19, outbreaks?
https://t.co/UxlBJ63Crn

Tribes sued your administration for delaying promised Covid relief funds and gear which they are still in desperate need of.

You should probably avoid using “Trump” in the same sentence as “rape” and “domestic violence” and “sexual assault” … because of … you know … optics.

Your daddy, such a friend to Native communities, LOLOLOLOLOL https://t.co/yUpzc0lQmU

There are many indigenous persons who can speak to this. Not YOU. Ask Sharice Davids of Kansas and Deb Haaland US house Reps.