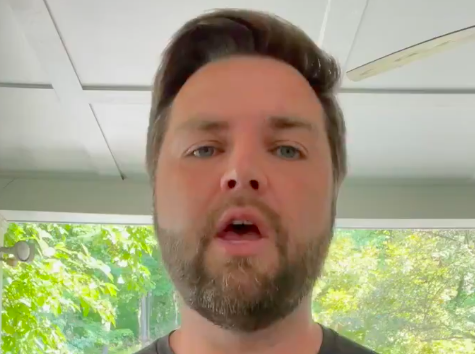 The midterm elections are just six weeks away and Republican U.S. Senate candidate from Ohio J.D. Vance is MIA.

The 38-year-old Hillbilly Elegy author hasn’t done any public events in days and his campaign won’t tell anyone where he is. On top of that, his fundraising operation is virtually nonexistent and, as of last quarter, his campaign was nearly $1 million in debt. Eek.

“J.D. is running a campaign where the faithful in the state, the county chairmen, the precinct executives, the executive committee and the Republican Party are saying, ‘where’s J.D.?'” conservative radio host Bill Cunningham tells CNN. “And they want him to do things. People want to meet him. They want to. This is a new guy, new kid on the block.”

He has also reportedly done a terrible job networking with other GOP figures, skipping key events and fundraisers and even turning down an invitation to a dinner hosted by Ohio’s Republican Gov. Mike DeWine, who will also be on the ballot this fall and whose coattails could help Vance nab a victory. Rude!

Some GOP strategists say Vance hasn’t been given the proper support he needs from the party, especially considering he’s a novice candidate who has never run for office before.

But a spokesperson for the National Republican Senatorial Committee says the group has “worked very closely with the Vance campaign and will continue to do whatever is needed to help him win big in November.”

Related: J.D. Vance wants to outlaw adult entertainment instead of assault weapons and the jokes write themselves

Then there’s that Super PAC Mitch McConnell is tied to that recently said it would spend $28 million on TV and radio ads to help boost Vance’s campaign. That’s in addition to the $17 million Peter Thiel’s super PAC blew on Vance earlier this year.

Others say the fact that the 38-year-old has virtually stopped campaigning is no cause for concern and that he just likes to “keep a light schedule, especially on weekends.”

But he somehow still managed to appear on Fox News show last night, where he spouted some wild right-wing nonsense about President Biden of declaring war on half the country.

“He’s like the dog who caught the car,” a senior Ohio Republican tells CNN.

“Anybody who thought that J.D. Vance, a first-time candidate, would have a cakewalk, that’s not accurate,” adds Alex Triantafilou, the GOP chairman of Hamilton County.

The seat Vance is running for was supposed to be an easy win for Republicans. But his Democratic opponent, Rep. Tim Ryan, now appears poised for what could be a major midterm upset. A poll released this week by Impact Research found Ryan with 50% support compared to Vance’s 47% and 3% who said they were still undecided, with a 3.5% margin of error.

When it comes to LGBTQ issues, Vance is about as homophobic and transphobic as politicians come these days. He opposes codifying same-sex marriage into federal law and doesn’t support protecting queer people from job discrimination. He also wants to censor classroom conversation about LGBTQ people, has referred to gay people as “groomers”, and blamed trans people for Russia’s war in Ukraine.

Related: J.D. Vance opposes protecting his own interracial marriage because he hates gay people so much

Subscribe to Queerty for a daily dose of #politics #foxnews #j.d.vance stories and more