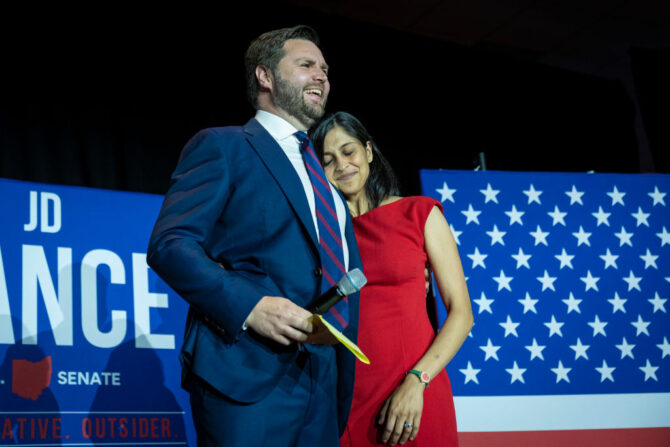 Another day, another stupid remark from GOP clown of Ohio J.D. Vance.

Speaking to reporters at the Ohio State Fair on Tuesday, Vance was asked about the Respect of Marriage Act, which passed in the U.S. House last month.

The law repeals the Defense of Marriage Act, which defined marriage as a union between one man and one woman. It would requires states to recognize all marriages as long as they were deemed valid in the state where they were performed.

Vance, who is married to an Indian-American woman and whose U.S. Senate campaign is being largely funded by gay billionaire Peter Thiel, replied, “You have a sky-high inflation crisis, you have a huge recessionary problem, and we’re arguing about rights that have already been granted by the Supreme Court. It seems like a bizarre distraction for a country that actually has much, much deeper and more serious crises.”

Related: J.D. Vance wants to outlaw adult entertainment instead of assault weapons and the jokes write themselves

He went on to argue that the Respect of Marriage Act raises religious liberty concerns and doesn’t account for the rights of churches or nonprofits to operate according to their values.

Because irony is apparently dead, shortly after making the remarks, Vance released a new campaign ad on Twitter featuring his wife, Usha, talking about their loving interracial marriage and beautiful son.

I love our first ad, where my favorite person tells my story. We fight for Ohio because it’s our home, and when I was a kid, Ohio gave me a chance. pic.twitter.com/4RfeAOfrIm

“I think the combination of [adult entertainment], abortion have basically created a really lonely, isolated generation that isn’t getting married, they’re not having families, and they’re actually not even totally sure how to interact with each other,” he said.

JD Vance said women who are beaten by their husbands should stay married to them.

JD Vance said Married Gay people should have their marriages stripped away.

Send money to @TimRyan to stop him cold

He’s quick to take into account, however, “religious liberty” and the rights of churches or nonprofits to operate according to their values.

JD Vance believes people should stay in violent marriages for the kids. His position is indefensible and dangerous.

We can’t let him anywhere near the Senate. pic.twitter.com/IEcAm9zWlJ

JD Vance is opposed to divorce, even in a violent home, gay marriage and all forms of birth control. His ideal marriage is between a belligerent bully like himself, a cowering woman, and kids who can't wait to leave home to escape their Dad's bigotry. It's the Republican dream

He is literally in an interracial marriage LOL

Subscribe to Queerty for a daily dose of #politics #j.d.vance #respectofmarriageact stories and more