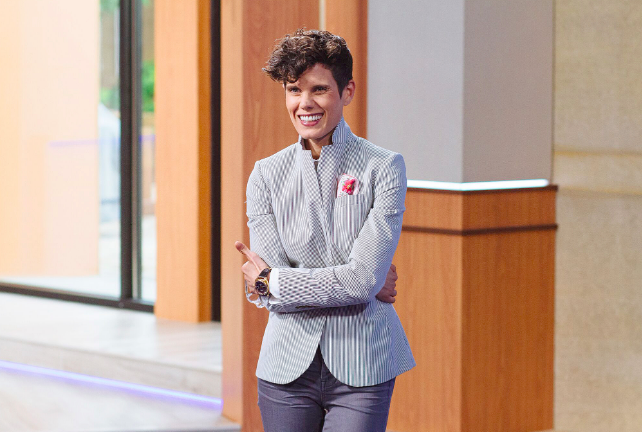 Who She Is: Lesbian news co-anchor at NBC-affiliate KARE 11’s “Breaking the News” in Minneapolis, Minnesota.

How She’s Contributed: In 2016, Shortal appeared on air with short curly hair, a blazer, a pocket square, pants, and a David Bowie t-shirt. Her look broke the unspoken “rules” of maintaining traditional gender norms on TV and inspired (and outraged) viewers by illustrating there are myriad ways a professional female can look.

Why We’re Proud: When Shortal first began working as a TV anchor in the early 2000s, she hid her sexuality because she didn’t know anyone else working as an openly gay woman in TV news.

Emulating the anchorwomen she saw on TV growing up, she maxed out her credit cards on stylish dresses, earrings, tall shoes, heavy makeup and bleaching her hair blonde. She felt that if she could just look like them, then it would be “the ultimate hall pass” to tell the stories she wanted to tell on TV.

But deep inside, she knew she was living a closeted life. And her exterior appearance began to feel like a prison. She knew she had to change. “It was no longer emotionally sustainable for me not to,” she said.

In an interview, Shortal says that she worried that if she dressed on the air like she wanted to, that she’d embarrass herself, that media writers would mock her for “going too far,” that her station managers wouldn’t allow it, that other journalists wouldn’t respect her and that viewers would yell for her to “dress like a girl,” shouting down the tiny amount of courage she had to be herself.

Thank you to everyone in my whole entire life. My heart is full. ??

Gradually, in the mid-2000s, she began coming out in her personal life.

“It was scary,” Shortal said, “but it also wasn’t one giant moment. I came out slowly and carefully…. I didn’t have a lot of confidence in being out and in broadcast journalism, so I never made a major public declaration. I told friends and family and slowly came out. With some, it didn’t land well.”

Gradually, she stopped dying her hair blonde, stopped wearing dresses, dropped the jewelry and heavy makeup and began cutting her hair short and wearing clothes that reflected her own style.

In 2016, she landed her own show on Minneapolis’ KARE 11. With the support of her station, she started wearing clothes that reflected her true self. In one of her earliest on-air appearances at KARE, she wore a David Bowie t-shirt, a blazer, a pocket square, glasses, and short curly hair.

Shortal says, “Clothing became my expression…. I found that once I knew who I was on the inside, I could express how I felt to be on the outside. I dress how I feel. And so my clothes are a reflection of who I truly am now.”

After wearing her new look for the first time on air, she says viewers wrote and thanked her for showing a different way for women to dress. Some even sent her pocket squares to wear on the air. Now she regularly appears on TV as her authentic self and she’s never going back.

“You can’t have an authentic voice if you feel like you’re in a costume,” Shortal says. “I found that once I knew who I was on the inside, I could express how I felt to be on the outside. I dress how I feel. And so my clothes are a reflection of who I truly am now.”

“All I am is a daily reminder on their screens that [viewers] can be who they want to be,” she says, adding, “Honor yourself. Be yourself. Identify yourself. Don’t ask for permission from others because you will without a doubt find those who will doubt you or question you back into your corner…

…Give yourself permission, because you are the only one of you this world will ever get.”