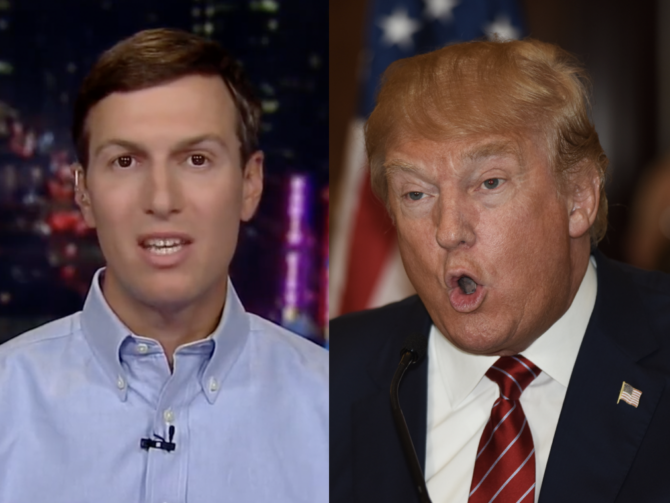 Jared Kushner appears to be doing everything he can to dispel rumors that he’s the “Mar-a-Lago” mole who ratted out Donald Trump to the FBI, resulting in the agency searching the ex-president’s Palm Beach, Florida resort earlier this month.

In an appearance on Fox News over the weekend, Kushner told anchor Mark Levin that the raid, which he called an “unfortunate turn of events”, was yet another example of Trump’s “enemies” persecuting him.

“President Trump is a fighter,” Kushner, whose new book Breaking History: A White House Memoir, which is being panned by critics, hits bookstore shelves tomorrow, said. “He’s always been a fighter.”

“In the way that he drives his enemies so crazy, they always over pursue him and make mistakes in trying to get him. That’s basically what happened here.”

Multiple sources close to Trump told The Guardian last week that after the FBI searched his home, aides began frantically speculating about who among them was in cahoots with the agency.

They quickly determined the person had to be close–very close–to the ex-president given what agents already knew when they showed up at the front door, including where his safe was located and to look for a specific leather-bound box.

Shortly after the raid, Mary Trump publicly speculated that Kushner was the confidential informant in an appearance on the podcast The Dean Obeidallah Show.

She continued, “And we need to think about who could also be implicated in this that would need as big a play as turning Donald in in order to get out of trouble, or at least to mitigate the trouble they’re in.”

“It sounds like somebody in Jared’s position. I’m not saying it’s Jared, but it could be.”

Related: Trump is freaking the F out after concluding “Mar-a-Lago mole” is likely a family member

Speaking to Levin, Jared also tried to dispel reports that there is tension between himself and his father-in-law, claiming they just played golf together “a few days ago” before going to to say that leakers are making up “fabulous claims” about his family.

Kushner also took to Twitter to suck up to his father-in-law, tweeting: “Working for @realdonaldtrump was the honor of a lifetime,” along with a photo of the two together on an airplane.

Working for @realdonaldtrump was the honor of a lifetime. ??????@IvankaTrump pic.twitter.com/YfgqxA50Bf

Forget it Jared. He knows it was you. We all do.https://t.co/3tN7DaTmOo

We’re still not buying your book or anything else you’re selling.

Am I the ONLY one who finds the timing of this post a little weird?… Kushner definitely saw the stories about how he might be the “leaker”… and now he randomly posts his devotion to trump?… just saying… the timing is… odd :/

He’s going to find out it was you….

You people are traitors. The only honor you deserve is life in prison