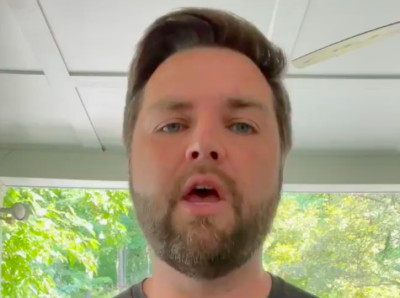 One week after saying he doesn’t give AF about what happens in Ukraine, Republican Senate candidate JD Vance of Ohio suddenly cares very deeply for the Eastern European country that is currently being invaded by Russian forces.

Last week, the “Hillbilly Elegy” author went on Steve Bannon’s podcast to say, “I gotta be honest with you, I don’t really care what happens to Ukraine one way or another.”

He added that he didn’t enlist in the Marines “to go and fight Vladmir Putin because he didn’t believe in transgender rights,” implying that’s the reason why the United States didn’t want Russia to invade Ukraine.

OH Senate candidate JD Vance: “I think it’s ridiculous that we are focused on this border in Ukraine. I got to be honest with you, I don’t really care what happens to Ukraine one way or the other.” pic.twitter.com/QtZbckZf0b

Vance followed that up with a statement saying, “spare me the performative affection for the Ukraine” and calling it “a corrupt nation run by oligarchs, that is as close to a functional democracy in 2022 as Afghanistan was when Joe Biden handed it over to the Taliban in 2021.”

Now, one week and one Russian invasion later, Vance is changing his tune. Yesterday, he issued a statement calling the invasion “unquestionably a tragedy”, blasting Joe Biden and “media elites”, and praising Donald Trump for his excellent diplomacy.

“Trump deserves an incredible amount of credit for the strength and diplomatic engagement that kept Putin in check—and Biden an equal amount of blame for his lack of leadership,” he said.

Our leaders should be honest with the American people and admit what they really want: military intervention from American or NATO troops. This would be a disaster, and we must stand against it under any circumstance.

In his statement, Vance failed to mention how Trump has been gushing over Putin since the invasion, or how Russian officials have begun running the ex-president’s flattering comments on state television, or how Russia has reportedly created a “kill list” which is believed to include LGBTQ Ukrainians, as well as journalists, activists, ethnic and religious minorities, and the country’s president, Volodymyr Zelenskyy.

Russian authorities have denied the existence of such a list, characterizing it as anti-Russian propaganda. But the U.S. told the United Nations this week that a hit list of “identified Ukrainians to be killed or sent to camps” does, indeed, exist. And Valeriy Chaly, Ukraine’s former ambassador to the U.S., tells Newsweek, “No doubt they not only have this list. … ‘Kill lists’ are a special instrument in their dirty game.”

Many on Twitter have been expressing their concerns for the LGBTQ Ukrainians whose lives are now at risk. Here’s what they’re saying…

LGBTQ+ people in Ukraine are in danger of being sent to concentration camps and right wing pundits are basically saying “serves you right” https://t.co/ZulJsh1caB

To my lgbtq+ brothers, sisters, they/them in Ukraine stay safe. We are with you #pride

Putin is powerful and violent. He has nukes. He also hates LGBTQ people. He’s completely against same-sex marriage and calls trans rights a “crime against humanity.”

This man and his army need to be stopped. First, for the people of Ukraine. But also for the world.

I stand with my Brothers, Sisters, and Non-Confirming Siblings from the Ukraine. Always. ????????????? #LGBTQ #StandingWithUkraine pic.twitter.com/dAABx0yBTO

Russia's recent actions will undoubtedly endanger the lives of LGBTQ+ individuals and all people in Ukraine. We cannot sit by as human rights are violated on a global scale.

Solidarity with our LGBTQ+ siblings in ?? Ukraine @KyivPride We @stonewalluk will do everything we can to support you and uplift your voice. https://t.co/ibWEuKgPk9

Ukraine is a democracy on the rise, where human rights, including LGBTQ+ rights and protections, have advanced leaps and bounds since 2014.
Putin is a Soviet-era autocrat trying to bring to life his imperialist fantasies. Trying to crush Ukrainian democracy.
I'm with democracy??

My heart is with the people of Ukraine pic.twitter.com/LYXvnDBgUu

Wishing for all citizens of Ukraine, especially the LGBT+ communities, to stay safe ???????????

Today is a sad day for the people of Ukraine ?? and for those who will be targets of an authoritarian reactionary cruel and violent invading regime, please send messages of support to all and as a gay man I send my heartfelt support to LGBTQ+ and all Ukrainians. ?? Jimmy x pic.twitter.com/QMBEF1WNav

Subscribe to Queerty for a daily dose of #politics #j.d.vance #ukraine stories and more