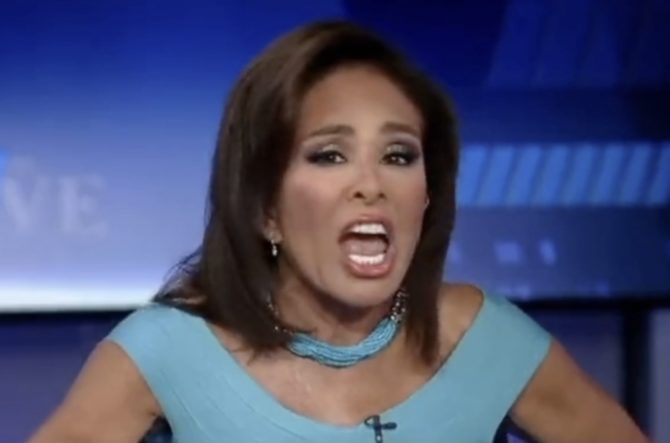 Fox News personality Jeanine Pirro was almost yanked off the air, according to a leaked email written by a network exec sent in the wake of the 2020 presidential election. And no, it wasn’t because she was suspected of throwing back too many glasses of boxed wine before, during, and after taping.

The dramatic email was first reported by NPR and is said to have complained that Pirro was reporting on dubious conspiracy theories found online to justify then-president Donald Trump’s baseless claims that the election had been rigged.

Pirro and others at the conservative propaganda network falsely accused Dominion Voting Systems, the election machine and technology company, of illegally trying to throw the race to Joe Biden by programming its software to discard ballots for Trump.

“The Dominion Software System has been tagged as one allegedly capable of flipping votes,” Pirro raged during a November 2020 taping of her show, citing Trump’s disgraced campaign attorney Sidney Powell’s bogus claims about the company. “And yet, we are criticized because we’re asking questions!”

Dominion filed defamation lawsuits against Fox News and several other ring-wing media outlets, conspiracy theorists, and Trump loyalists in late 2020 and early 2021. The company says it suffered “enormous and irreparable economic harm” and projects losing upwards of $600 million in profits over the next eight years.

The producer’s email is among the voluminous correspondence acquired by Dominion’s attorneys as part of its discovery of evidence in a $1.6 billion defamation suit it filed against Fox News and its parent company. Dominion alleges it has been “irreparably harmed” by the lies, conspiracy theories and wild claims of election fraud that aired on Fox.

The role of Pirro – a former New York state judge and Westchester County district attorney – remains under sharp scrutiny. In 2019, Trump called for her return to the airwaves after the network publicly condemned her anti-Muslim remarks. In 2020, she attended Trump’s belligerent address late on Election Night from the White House and advanced his arguments on the air in the days and weeks that followed.

Fox Business host Maria Bartiromo also made outlandish claims about the election, saying, “This is disgusting and we cannot allow America’s election to be corrupted!” In December 2021, she claimed “an intel source” confirmed to her that Trump did, in fact, win the election, though her bombshell report was never elaborated on or substantiated. Bartiromo is set to be deposed under oath in Dominion’s defamation lawsuit later this week.

Now, back to Pirro.

Court records show that the Dominion and Fox News’ lawyers are currently butting heads over whether she should be forced to testify about private text messages sent around the time of the 2020 election that the tech company says are relevant to its defamation case.

Dominion’s attorneys have obtained emails, texts, WhatsApp messages and more, documenting how the network’s executives and journalists behaved and acted behind the scenes, as well as determining what they actually knew about the claims, according to three people with knowledge of the litigation.

The Fox News producer’s email to Fox execs said: “Fox cannot let host Jeanine Pirro back on the air. She is pulling conspiracy theories from dark corners of the Web to justify then-President Donald Trump’s lies that the election had been stolen from him.” Yet Fox is still at it?

jeanine pirro is a psychotic drunk.

That woman could clear out a Long Island vineyard on a sunny Saturday afternoon.

Jeanine Pirro knows she might be in legal trouble for her lies on FOX and has already has Bartles & Jaymes on retainer.

In related news, here’s a photo of Pirro’s office at Fox HQ in Manhattan. pic.twitter.com/QV2dmTw31y

So Fox knew Jeanine Pirro was broadcasting unproven conspiracies regarding “election fraud” and allowed her on the air anyways.

Don’t blame the wine. Boxed wine gets a lot of us through. We just don’t couple it with weird internet research lol