Jem Garrard is about to take the biggest risk of her career.

The Canadian-British writer has long labored on smaller, more personal projects. Among them: the horror-comedy Killer High, the Disney sci-fi series Mech-X4 and Canadian soap opera You Me Her. The later focused on a polyamorous suburban heterosexual couple in a three-way relationship with another woman.

Now Garrard launches her biggest project do date: creating & showrunning the Syfy series Vagrant Queen. Based on the cult comic of the same name, the show follows Elida, a tough loner woman working as a scavenger and gun for hire in a far-away galaxy. What no one realizes is that Elida is actually the deposed queen of a beloved monarchy, now replaced by a despotic republic. When Elida’s path crosses that of the officer that murdered her mother, she teams with her friends Isaac and Amae to elude the republic and avenge her mother’s death. But Elida’s not the only one with secrets…

In the midst of COVID-19 lockdown, we spoke with Garrard about hitting the tipping point in her career and in bringing the very queer new show to Syfy. Vagrant Queen premieres March 27.

So we’re talking just before the premiere. How’s the pressure?

It is a complete mixture of excitement and nerves. I definitely have butterflies the past few days. I’m still so busy with post-production and finishing up the last few episodes that I’ve managed to keep it out of my mind. But the butterflies have started.

I think that is probably natural.

And this is your first big show.

It is, and I’m showrunning. I’d been showrunner on a small local series, but this is my first big production.

How did the comic book first come to you?

I’m a big comic book nerd. I’ve been a fan of Magdalene Visaiggio [creator of the comic] and her previous work. Syfy and I and Blue Ice Pictures had just done a film together, and we were looking for other properties, and what other books were out there that would make a great adaptation. Vagrant Queen had not been long out, and it was one we all responded to. We thought it could be a really fun adaptation, really unique in the space opera world.

What about it spoke to you?

I love Elida. I love the banter between her and Isaac, and ultimately, it being a kind of personal, intimate journey for this woman set against a space opera backdrop. The fact that she’s this queen, but it’s not really about that. It’s not about her throne getting taken away, or about a war or big battle. It’s about this woman trying to find her place in the galaxy and going on a journey to find her mother. And I liked that approach.

So I’ve seen the first five episodes. The first thing to strike me were the visuals—there’s a very strong style here. The show has some definite Luc Besson vibes to it, along with some Guardians of the Galaxy humor.

Was that a conscious choice?

Those all came up as references for sure. It’s inevitable when you’re creating a world like this. We really just wanted to put out something very fun and very bright & colorful. A lot of sci-fi is a lot darker and monochromatic. We wanted this colorful vibrant world. Because of that, the references coming up were Guardians and Fifth Element and Thor: Ragnarok. Those were obvious, and we pulled from that when we developed a visual language.

The other really exciting thing is the number of queer characters. Chaz & Amae are both queer, or so the series implies. Is that meant to be true of their entire species?

So, when it was about connections between characters and relationships to build. We just looked at what would make sense to write, and where we wanted to take the characters. That was more the approach than “Who’s gay, who’s straight.”

Thank you. That means a lot.

This is also silly to say, but it adds an element of suspense. You don’t know who is going to hook up with who. Anything is possible

Is that an element from the comics?

It wasn’t so much in the first issue, although I knew that it was an interest of Mags. She often talks about how I tapped into the underlying queerness of her comics. She writes a lot in her other work a lot of great queer characters. So we wanted to push that in the TV show. It’s been awesome to see because her new round of Vagrant Queen she’s really tapping into that and bring queer characters to comic books. It’s really awesome.

The other major element here is gender subversion, in that Elida is not a typical woman of sci-fi. She’s capable, she’s a loner, she is an antihero. I can’t think of too many female antiheroes in sci-fi or comics—maybe Mystique or Catwoman. Who did you look to for inspiration?

That’s a good question. Ultimately, we wanted to write a character that felt layered. When you write strong female leads, it’s often easy to just put them in the “tough, angry” box. We kept seeing a lot of auditions that would play Elida that way, and she was so much more than her anger. We had to look underneath the tough exterior: why is she strong and tough? Those are what’s exciting about the character. She’s been forced to be this way to survive. She’s been trained her whole life to be a fighter and forced into a life on the run. So that’s where we started, and we see through the series as her friendships with Amae and Isaac grow, what’s underneath the facade. There’s often heart and silliness and loyalty there.

Related: How Anthony Rapp became a sci-fi icon and a #MeToo trailblazer

We did this with Amae as well—she’s a new character, not in the comics. Creating her, I knew going in that I wanted the character to be queer. But earlier interpretations of the character were sort of this lesbian mechanic. The amount of auditions we had of women coming in wearing tank tops and playing her tough-as-nails, it was funny. It was also the opposite of what we wanted to do with Amae. We wanted a character we had never seen before who wasn’t a stereotypical lesbian. She’s sort of the glue that holds the crew together. She’s the most emotionally intelligent, and weird, and quirky and innocent. All those qualities I hadn’t seen in a queer character in sci-fi before. She was fun to write.

Because of the number of queer characters in the show, when you go to Syfy, do you get the side-eye? How far is Syfy willing to let you go with that?

You know, I’ve been so spoiled with this show. My network exec that I work with, Josh Van Houdt, has been the most supportive exec I’ve ever worked with. He was a huge part of why we were able to write these queer characters. We had nothing but support from Syfy.

That’s so encouraging to hear.

It is. They care a lot about their audience and representation and diversity. So it was really a dream show to work on.

You’re one of the few queer women running a genre show. There are others, of course: Noelle Stevenson, the Wachowski sisters. As a queer woman trying to work in what’s traditionally considered a “man’s” genre, have you encountered resistance?

Not on this show, but certainly in the past. I mean, first of all, it’s a tough industry. Being female on top of that is even harder. You just have to look at the numbers to see how far away from parody to see that. On top of that, being queer—early on in my career it was a struggle. It was a struggle to get into the genre I wanted, which was action and sci-fi because those were so heavily dominated by men. At the time, it was drama and rom-com that offered me breaks. But it took me a long time to break into the stories I wanted to tell. I’m happy right now to see a shift to tell more diverse stories. I’m honored to be part of that change. So when I was put in a position of power, it was very important to me to push the change further and create an all-female writer’s room and bring on female directors.

I also love that the world has started to figure out that women also love action. They can write and direct action and genre films.

Yes! And the audience is there for it. It’s kind of ridiculous all the old views on it. You see that in comic books, that half the readers are women. Gaming as well; I’m a big video gamer. It’s taken a long time for men in positions of power to realize that women like the genre too, and they’re not going to lose money by including women. 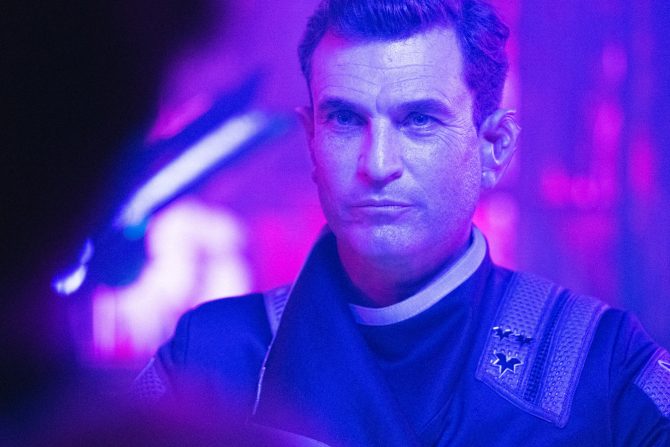 You’ve mentioned this is your biggest project to date.

How have you evolved personally and artistically from this experience?

That is a really great question. It’s given me so much more confidence in my own voice. It really was a dream show in that it encompassed everything I love about the genre. I fell in love with these characters, and it was such a fulfilling experience to see them come to life on screen, and what the actors brought to it.

Adriyan Rae who plays Elida has a great screen presence.

Yes she does. She’s an unknown that just blew us away.

How many seasons do you have mapped? Do you have a plan?

For sure. I wanted to take as much as I could from the comics, but even the first season goes beyond those six issues that we had. You need a broader arc, so we have three solid seasons mapped out already. But obviously that’s going to evolve. It could easily evolve to more, but I want three solid seasons to finish the arc in my head.

Right now, it’s a weird time to be promoting a show. 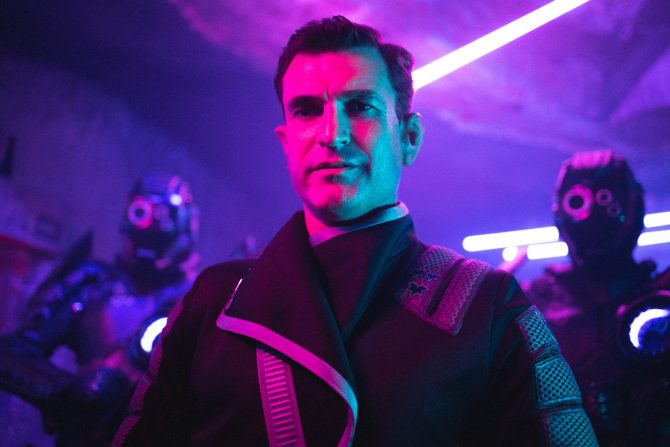 Especially where everyone wears gas masks

I know right? Everything feels heavy. But we made this show to make people laugh and for enjoyment. So I think it’s come at a good time. I know personally, what’s saving me right now is movies and TV and stories. So I hope that it can do that right now at this time.