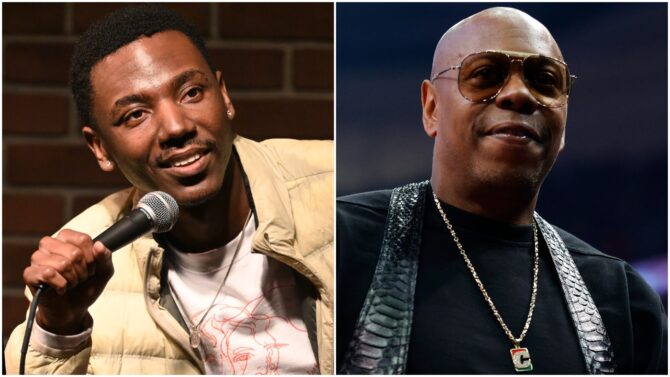 In a new profile for GQ, Jerrod Carmichael addressed the nature of “cancel culture,” Dave Chappelle, and the fallout with his family after coming out in his intimate comedy special, Rothaniel, which premiered on HBO earlier this year.

During his frank conversation with the magazine, the typically private comedian reflected on the encouraging response from his niece and why he has faith in the younger generation, which led to him opening up about his thoughts on the way certain big-name comedians use the idea of cancel culture as a “boogeyman” scare tactic: “I love this generation. I actually f*ck with them, and f*ck all those comedians that are going so hard against them.”

Though he didn’t initially mention Chappelle by name, it was pretty clear who Carmichael was referencing. Over the past few years, Chappelle has been criticized for continually “joking” about trans people in his stand-up material, including his 2021 Netflix special, The Closer, which prompted a company walkout in protest by the streamer’s LGBTQ employees and allies. When Chappelle took the stage at the Hollywood Bowl earlier this year as part of the Netflix Is A Joke comedy festival, he remarked, “If this is what being canceled is like, I love it,” to the cheers of a sold-out audience.

“Look, I get it. Everybody’s got to create a boogeyman to sell tickets. But it’s not true,” continued Carmichael. “Who’s getting canceled for what they’ve said? What does that mean, that people are mad on Twitter? Everybody’s fine. These grown men are fine.”

But, before long, Carmichael was addressing Chappelle directly, calling him out for continuing to complain about the trans community:

“Do you know what comes up when you Google your name, bro? That’s the legacy? Your legacy is a bunch of opinions on trans shit? It’s an odd hill to die on. And it’s like, hey, bro. Who the fuck are you? Who do you fuck? What do you like to do? Childish jokes aside, who the fuck are you? It’s just kind of played. But he’s choosing to die on the hill. So, alright, let him.”

When Carmichael hosted Saturday Night Live back in April, the comic joked he was “the least famous host in SNL [history],” but his profile’s been on the rise ever since his guest stint on the long-running sketch series and his HBO special were warmly received by critics and audiences.

The newfound attention is not something he’s taking lightly. As he shared with GQ, coming out in Rothaniel has changed him for the better: “I’m not hiding anymore… Once I knew that I had the power to tell the truth and I wasn’t… I had no other choice.”