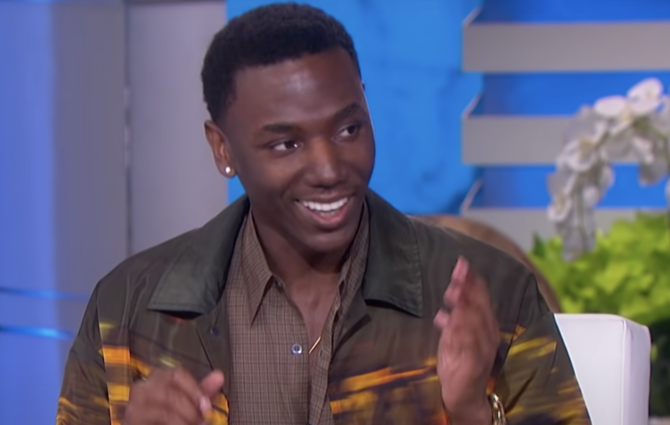 Two weeks before the final episode of The Ellen Degeneres Show, comedian Jerrod Carmichael appeared on the program to talk about his latest special Rothaniel, in which he came out as gay, and the response he’s received since. At-home viewers also saw Carmichael thank Ellen for coming out when she did, explaining how her courage directly impacted him.

Ellen’s studio audience also witnessed one joke that never made it to air. In a recent interview on Showtime’s Desus & Mero, Carmichael revealed the joke — well, the punchline at least — that was apparently too much for the daytime NBC crowd. He also said he thinks producers made the right call.

The line, minus the aforementioned context, of course, elicited a bewildered stare from Desus. Mero, on the other hand, burst out laughing.

Carmichael continued: “And that wasn’t fit for 2 p.m. daytime television, in between, like, some alavetra (?) pill and a tampon commercial.

“And I’m doing this joke, and by the way — silence — rightfully so. The audience turned on me, Ellen was like, ‘Jesus Christ.’ The boom mic guy, I swear to god, I saw the boom mic kind of slowly move away. Rightfully so.”

Still, the experience was overwhelmingly positive and Carmichael has no plans to censor his future material.

“I loved doing the show, I should say that. They should have taken it out. But it’s just, like, I’ve been trying to be as free as I can be. Even backstage I have to take a moment before I walk out, ’cause it’s like, telling the truth on camera is an odd thing.

“I don’t want to waste time, everything just feels like a waste if you’re lying. Lies beget lies and you become mired in it.”