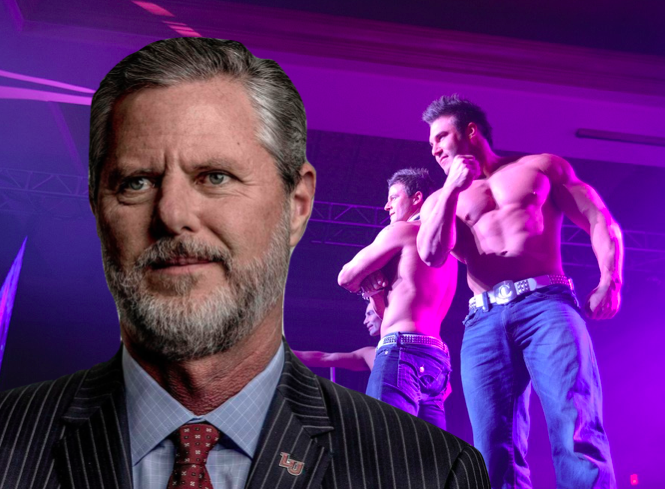 Liberty University president and antigay activist Jerry Falwell Jr. swears that’s not him in photos taken at a 2014 circuit party in Miami Beach. But multiple sources, including the photographer at the party, beg to differ.

The accusations were first made in the explosive exposé published by Politico this week. Investigative journalist Brandon Ambrosino reports:

On July 19, 2014, popular Swedish DJ John Dahlbäck performed at Wall, a nightclub in Miami Beach, Fla. That night, the club happened to have a photographer on-site to grab candid shots of the revelry. The photos were shared online by World Red Eye, an outlet that documents Miami’s nightlife scene, and Jerry and Trey Falwell were visible in some of the pictures—the outlet identified Trey by name.

Of course, a guy going to a circuit party in Miami Beach normally wouldn’t be that big a deal… except that Liberty University has a strict policy against this sort of behavior.

The college prohibits alcohol consumption for all students, even those who are over the age of 21, living on or off campus.

Liberty University prohibits the possession, use, manufacture, or distribution of alcoholic beverages, tobacco, nicotine, illegal drugs, and non-prescribed controlled substances by its students, whether this occurs on or off campus. … Violations of this prohibition may result in disciplinary action, including a sanction of non-return or administrative withdrawal.

All students are asked to display mature Christian behavior in social interaction. Proper respect must be shown to all individuals at all times. Harassment of any type will not be tolerated. Handholding is the only appropriate form of personal contact. Improper personal contact or other forms of public display are considered in poor taste. After dusk, students should not be alone with an individual of the opposite sex in any unlighted area such as the ball fields, parking lots, parked cars, ravine or other wooded areas, etc. This is considered improper social behavior.

When asked by Ambrosino about the photos, Falwell denied ever going to the nightclub and said the pictures were photoshopped.

“There was no picture snapped of me at WALL nightclub or any other nightclub,” he claimed. “I’m sure you already knew that though.”

“If you show me the picture, I can probably help you out. I think you are making some incorrect assumptions, or have been told false things or are seeing something that was photo-shopped.”

But sources tell a much different story. They say Falwell was “angry” when he learned the photos had been taken and even tried having them scrubbed from the internet.

To remedy the situation, multiple Liberty staffers said Falwell went to John Gauger, whom they characterized as his “IT guy,” and asked him to downgrade the photos’ prominence on Google searches. Gauger did not respond to requests for comment.

Now, the photography agency that took the photos is also pushing back against Falwell’s claims the images were doctored.

World Red Eye has been documenting Miami’s party scene for over 20 years. After being accused by Falwell of photoshopping the images, the company’s founder, Seth Browarnik, put out a statement this morning that reads:

For 21 years, I have maintained an impeccable reputation for documenting Miami Beach’s storied social scene.

We wholly reject Jerry Falwell Jr.’s baseless allegation in yesterday’s Politico report by Brandon Ambrosino that one of our pictures was “photo-shopped” or manipulated in any fashion.

We, in fact, did not know Politico’s purpose for licensing the image and were as surprised as anyone to discover that Mr. Falwell was among the partygoers we photographed on July 19, 2014 at WALL Lounge.

As a result, we reviewed all the images we have from the event and discovered an additional four photos that include Mr. Falwell and two more of his son.

Statement in response to yesterday's @politico story on Jerry Falwell Jr. that included our photographs. Additional photographs of Mr. Falwell and his son are posted here: https://t.co/szq7nAFkP0 pic.twitter.com/Y8t36Qpfqa

Browarnik included several more pictures of Falwell at the club. You can see the all of the images HERE.

So now that Falwell has officially been caught in a lie, we can’t help but wonder: What else might the evangelical leader be lying about?

His “close friendship” with the pool boy perhaps?

His “business mentorship” to his personal trainer maybe?

Oh, and what about those x-rated photos of himself that he swears absolutely do NOT exist?

Subscribe to Queerty for a daily dose of #life #jerryfalwelljr. #lying stories and more