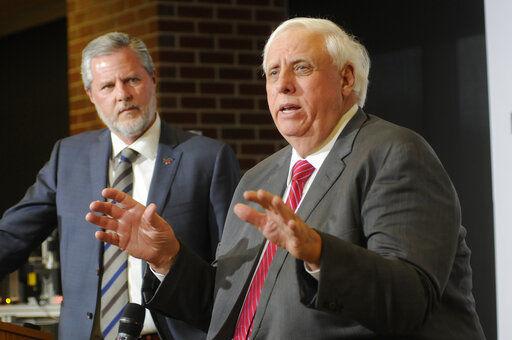 Jerry Falwell Jr. is urging disgruntled conservative counties in Virginia to secede from their state and hop on over to West Virginia where Democrats aren’t in charge and they can be more homophobic.

Fallwell has teamed up with West Virginia Gov. Jim Justice, who is currently running for reelection, to encourage their fellow homophobes to participate in a mass exodus.

“What’s happening in Virginia right now is a tragedy in the making,” Falwell said at a press conference this week. “Democratic leaders in Richmond, through their elitism and radicalism, have left a nearly unrecognizable state in their wake.”

“They are using their power to strip away the God-given rights held by every person in the state, despite their due protections under the U.S. Constitution.”

Added Justice, “If you’re not truly happy where you are, we stand with open arms to take you from Virginia or anywhere where you may be!”

Unless, of course, you’re LGBTQ, a person of color, not a Christian, or fall anywhere outside the straight, white, heterosexual identity.

They are calling the proposed movement “Vexit,” and lawmakers in West Virginia have already begun drafting up formal resolutions to try and make it happen.

“We saw their way of life under attack and we wanted to offer assistance,” says Del. Gary Howell, a West Virginia Republican who sponsored one of the resolutions.

Conservative activist Rick Boyer says he will do everything he can to help make “Vexit” happen. He believes there is a growing number of conservative Virginians who are “serious” about leaving the state that doesn’t “respect their rights.”

“This isn’t street theater,” Boyer insists. “We fully intend to do everything we can to see it through.”

When asked for comment on the matter, Virginia Gov. Ralph Northam, a Democrat, had only this to say: “As always, Jerry Falwell’s words speak for themselves.”

Of course, nobody seems to be asking the most obvious question here, which is: What happens if Vexit actually happens but then Democrats take full control of the West Virginia statehouse, too?

Subscribe to Queerty for a daily dose of #jerryfalwelljr. #vexit #virginia stories and more