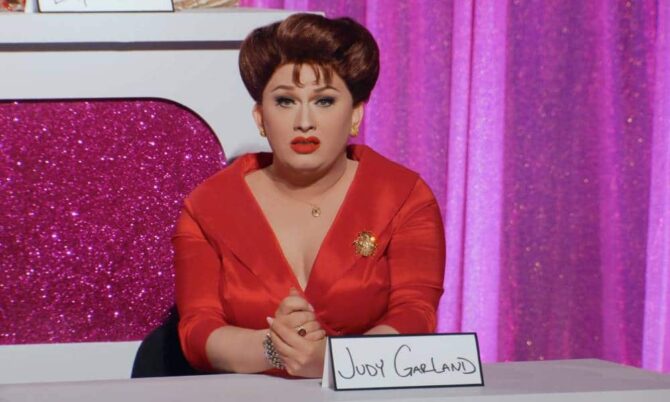 The long-rumored winners’ season of Rupaul’s Drag Race All-Stars is finally gracing our screens. This season features the return of some of Drag Race’s most beloved alumni, and few moreso than Jinkx Monsoon, whose underdog storyline, “water off a duck’s back” optimism, and impeccable impression of Grey Gardens’ Little Edie charmed viewers on season five of the show.

Now here she is competing again some nine years later, and if her newest Snatch Game performance is anything to go off of, she’s only grown in charm and wit. We caught up with Jinkx about her performance so far, her upcoming music, and surviving the “Realness of Fortune” ball episode.

In the inevitable Hollywood retelling of the story of Jinkx Monsoon, who would you have play you and why?

I’ve thought this a few times… It depends on if it’s a drama or a comedy. I think if it’s a drama, I would say Macaulay Culkin; he does some fantastic work with his character studies. If it’s a comedy, Kathy Griffin. Or maybe Tilda Swinton! I’ve always loved Tilda Swinton as the enigmatic, androgynous, mythical being that she is. It all depends on the tone of the movie.

I don’t think I was really thinking in terms like that, because I knew no matter what I was just going to be focused on doing the game plan I laid out for myself. No matter who gets cast, everyone wins because they’re good at what they do.

Your turn as Judy [Garland] in the Snatch Game has easily been the most talked about moment of the season so far. How long have you had Judy in your back pocket, and how did you prepare her for the snatch game specifically?

It was my friend Thirsty Burlington in Provincetown who kind of unlocked Judy within me. I don’t try to impersonate anyone unless I can get their voice really, really well – like I love Bette Midler, and Bette Midler seems like such a no brainer, but I’ve never been able to zero in on her voice. There was something about Thirsty, the way she does Judy, I heard this quality in her voice and I was like, “That’s it! That’s what I’ve been missing.” She just unlocked it.

So then for the last couple of years, I would just kind of joke around with friends doing Judy. I like to do conversations between Judy and Liza. Sometimes in my live shows – I have a show called Jinkx Sings Everything that’s an improv-based show that I do – I oftentimes will just impromptu go into Judy and Liza talking to each other. So when I knew I was going to possibly take her to a bigger arena, I got Thirsty’s blessing to do her, since she was the one who unlocked her within me.

I’m so glad I went with that choice, because it’s been surreal to see this reaction. Just like with Little Edie, I’m happy to ignite a love of icons of a bygone era within new generations. I always joke that drag queens keep moments in history alive for the queer community, and I succeeded in doing that with snatch game yet again!

Then onto episode three: your Baby Jane Fonda was so funny, and the dress you made for the last category really ended up coming together, but there was that moment in the Werk Room where it was a little touch-and-go.

No one person can have every talent in every skill, and I’m very realistic that designing and sewing is not my forte. But thanks to Trinity talking me off the ledge I finished the dress, I created something that I could wear down the runway, and it didn’t completely fall apart.

It was not in my mind that I was gonna win a ball challenge no matter what. Even if I were at my personal best and I strengthened my sewing skills over the years, I’m just not going to catch up to some of the girls that are on this season. There’s so many talented queens on this season, and so many of them surpass my skills tenfold when it comes to sewing and designing, so I wasn’t begrudging it so much as I just wanted to not embarrass myself.

Well, like you said, that was your one weakness and it’s passed!

I was trying to take the heat off of me when I said “this is my one weakness.” It was a funny moment, because I don’t know that that’s something you should announce to your competitors.

You have your new single”Know-It-All” out that is such an absolute groove. What can you tell us about your upcoming EP?

The EP is a taste of a future full feature album. I had talked with my music partner Major Scales for years about doing kind of a rock opera, very inspired by one of my favorite TV shows Steven Universe. This new music is all set in a future time in outer space, and “Know-It-All” is kind of an upbeat ditty talking about the ills of toxic masculinity.

Major Scales is such an amazing music partner to have, because he’s known me for so long and he writes really well for my voice. Everything that he writes for me is based off of my real life experiences.

“Know-It-All” I think is the perfect first song. We’ll have more singles coming out and an EP coming out relatively soon, and then hopefully by the end of the year we will have the full feature album out. I’m very happy; I’ve been working hard to make the most of this time.

Related: Why ‘Drag Race All-Stars 7’ is THE season to watch

Outside of your season five crowning, when was the first time you’d say that you felt like a winner in your career? What did that moment mean to you?

I think what I learned is that there’s no one moment where you’re going to feel like a winner, it really has to come from you.

I think a trick of this industry is the idea of the big break; you think when you’re young going into this field that there’s going to be this one moment where you have this stamp of approval and that’s it, you’re a celebrity and you’re an icon and you’re a success and that’s it, but really you have to find those accomplishments within yourself and you have to give yourself those feelings. I take every little step forward as a victory to celebrate.

It’s taken years, but now I feel like a winner every day because I do what I love. I’ve made a career out of what I’m passionate about. Every year there’s new opportunities coming my way and I just keep working hard. As long as I keep working and I keep staying true to what I’m passionate about and creating the work that I want to see in the world, then I’m a winner every single day.