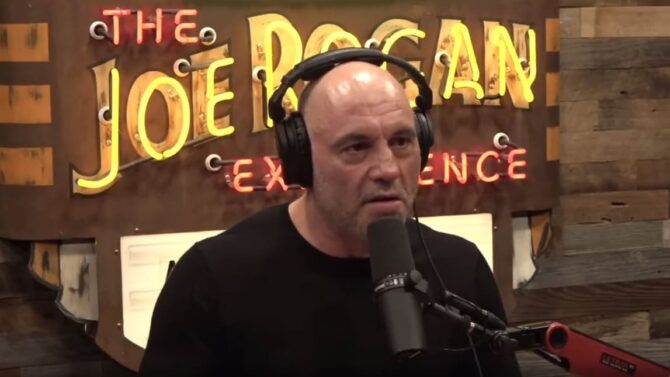 Joe Rogan has walked back his apology for repeatedly using racist slurs on his podcast.

Quick recap: Earlier this week, Rogan issued an apology after a video montage of him using the N-word and comparing black people to apes dozens of times began circulating on social media. Shortly after that, Spotify quietly removing more than 100 episodes of the podcast from circulation.

On yesterday’s episode of his show, Rogan addressed the ongoing controversy once again. Only this time, instead of expressing regret, he claimed he has become the victim of a “political hit job”.

“In a lot of ways, this is a relief,” he said. “That video had always been out there. This is a political hit job.”

“They’re taking all this stuff I’ve ever said that’s wrong and smushing it all together. It’s good because it makes me address some stuff that I really wish wasn’t out there.”

Rogan went on to argue that he wasn’t actually being racist when he all said those racist things.

Adding another layer of absurdity to the story, police in Las Vegas recently arrested a man who described himself as “Joe Rogan 2.0” for making bomb threats at the STRAT Hotel on the las Vegas Strip.

Security encountered Brian Gower, 46, near the entrance of the hotel screaming that he planned to blow the building up.

Fox News reports that officers detained him for the second time that day. Police had previously encountered him claiming “he was going to kill his ex-wife because he had been in prison because of her.”

During his detainment by STRAT security, Gower referred to himself as Rogan, claimed to have a grenade in his anus, and said his lawyer was Saul Goodman, the fictional protagonist of the series Better Call Saul.

In his interview with security, he also made conspiratorial comments about the Illuminati and North Korean dictator Kim Jong Un. He further claimed to be an actor raising awareness of bomb threats. Police have since charged him with terrorism.

Related: Just when we didn’t think the Joe Rogan thing could get any stupider, Caitlyn Jenner entered the chat