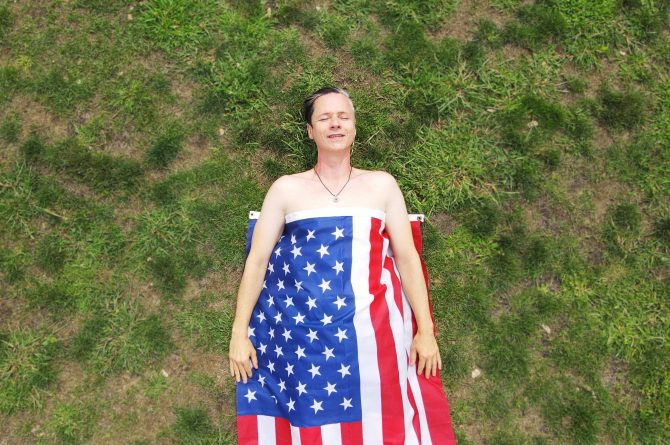 With so much speculation aimed at how Trump might react if he loses the election, here’s a scenario the pundits haven’t chimed in on — what if he refuses to leave office and Mitch McConnell eats him?

That’s the setup of John Cameron Mitchell’s new single, “New American Dream,” and things only get stranger, and ultimately more glorious from there.

“New American Dream is a lockdown-inspired remotely organized platonic musical orgy,” Mitchell said. “The idea started in March during self-isolation in a 100-year-old stone hut near Palm Springs. I encouraged screen/songwriter Our Lady J to send me a piano track over which I wrote the melody/lyrics to ‘See You Again,’ a tribute to the homeless during the pandemic. It went so well that I reached out to a variety of musical friends who sent me their own tracks that I could write to. I even contacted a stranger in the South of France, Izae, on Instagram because I liked his cover of a Hedwig song and we ended up writing two songs for the album.”

“Like the old story about the Stone Soup, where strangers throw whatever food item they possessed into a communal pot, old friends and new donated music, vocals, overdubs, mixing, mastering, video production, art and publicity,” he added. “Soon I realized we had a double album that could benefit the various charities that I’ve been helping through this dark time with Hedwig merch sales and Cameo videos. The whole experience has been such a comfort to us and we hope others will feel it too and add to the pot for the benefit of those in need.”

Part one is out Friday, September 4, with part two coming November 6.

Now buckle up for the video for “New American Dream” directed by Matthew Zanfagna:

Not how that works
35