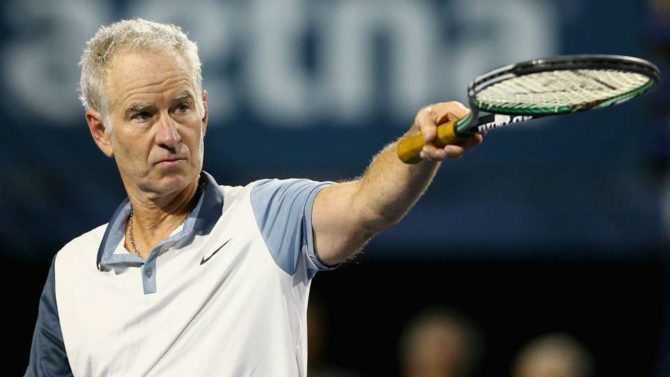 It’s safe to say you don’t wan to end up on John McEnroe’s sh*t list.

The famously hot-headed tennis champion has channeled his fiery passion at a new annoyance that’s been getting under his (and many others’) skin of late: fellow tennis legend Margaret Court and her seemingly endless river of homophobia.

First there was the letter she wrote denouncing Qantas airlines because its openly gay CEO (after getting a pie in the face, mind you) recommitted to fighting for marriage equality in Australia, where same sex couples still can’t wed.

Next came her demeaning charges that “tennis is full of lesbians,” and that in her time “there were only a couple,” but they “led young ones into parties.” What a firm grip she’s got on human sexuality.

While the currently top-ranked Andy Murray took the diplomatic road when he refuted Court’s comments, it wouldn’t be McEnroe without a little flair.

Here’s some of what he says:

Alright, first things first. The self-appointed commissioner of tennis wants to make one thing very clear: he is a strong advocate of same-sex marriage. I actually don’t see any reason why we shouldn’t give them the right to be as miserable as everyone else.

Margaret Court is a legend in our sport, with 24 Grand Slam singles titles, and 62 overall. OK, most of them were before the open era, but who’s counting? 34 to be exact.

And she did lose the first battle of the sexes to Bobby Riggs. Hold on… She lost to Bobby Riggs, and then Billie Jean King beat the sh*t out of Bobby. Hmm.. now I think I know where that hatred may come from.

Margaret Court is telling us “Tennis is full of lesbians!” The way I see it, there are three options regarding this statement:

McEnroe goes on to address the growing pressure on the Australian Open to change the name of the stadium that currently bears Court’s name. He has a different plan:

Keep the name, and when same-sex marriage becomes legal in Australia, I will personally call my good friend Elton John to host the biggest same-sex mass wedding ceremony ever seen, in Margaret Court arena.

Check out the highly recommended video below: