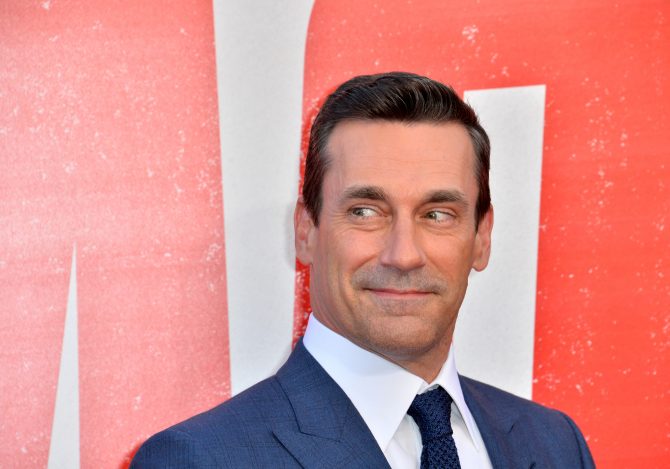 This downtown legal drama started all the way back in 2013, when Barak Obama was still president and we didn’t yet know that Robin Thicke singing about “blurred lines” was maybe more than a little creepy.

In one HuffPost article, a photo of Hamm walking down the street was published with a black box inserted over his crotch containing the words: “Image Loading.” See what they did there?

The photographer who took the shot, Lawrence Schwartzwald, wasn’t amused by the joke as he was never compensated. He filed a lawsuit against Oath, Inc., the owner and operator of HuffPost, for unauthorized use of his image.

But this week a Manhattan federal court ruled in HuffPost’s favor, deciding that the photo was protected by the “fair use doctrine.”

Judge Ronnie Abrams cited legal precedent for media outlets publishing images that “illustrate what all the fuss is about.”

“Here too, the photograph was used to illustrate what all the fuss is about, namely Hamm’s ‘privates’ and the public’s fixation with them,” Abrams wrote.

Related: PHOTOS: Kit Harington caught adjusting himself, and there appears to be a lot to adjust

HuffPost’s legal team argued that their use of the photo was permissible as it was “transformative.” Their version employed a superimposed box, photo caption, and a title, which together “fundamentally transformed the character and purpose of [its] use.”

Abrams agreed. Via the ruling:

Unlike the original Photograph, which Plaintiff claims had the objective purpose of “illustrat[ing] what Jon Hamm looks like wearing trousers in public while he walks down the street, ostensibly without any underwear,” Oath’s use of the Photograph served the dual purpose of mocking both Hamm and those who found the Photograph newsworthy in the first instance. The text box with the words “IMAGE LOADING” in all caps—a play on words that alludes to both the nature of digital technology and the body part at issue—suggests that Oath is making fun of Hamm, not merely “illustrating” his appearance.

We imagine the author of the post nodded fervently upon hearing the judge’s interpretation, wiping away the sweat from their forehead. “Yes that’s exactly what I was going for!”