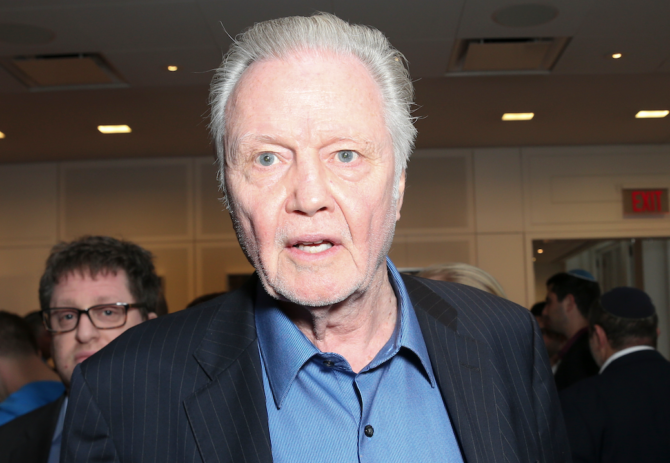 Actor and conservative mouthpiece Jon Voight is trending this week—and, as you can imagine, it has nothing to do with his career. When was his last good performance anyway? Holes, nearly 20 years ago?

No, instead, it’s because he’s calling for the impeachment of Joe Biden, who he says “has wronged this nation’s glory.”

In yet another of his infamous creepy, dead-eyed videos, Voight moralizes straight to camera, yammering on about protecting the nation during this time of “so much turmoil.” As he suggests—amid a distracting amount of lip-smacking—the reason there’s so much unrest right now, why we’re all “very unsafe” and “angry,” is solely because of President Biden. Apparently he’s the lone factor standing in the way restoring the country to its “former greatness,” or whatever.

Can we all see eye to eye? pic.twitter.com/DQeqYOe9In

Outside of the call for impeachment, Voight says a whole lot of nothing in the video, speaking only in vagueries about the “darkness” we’re living through and why Biden is to blame:

“We cannot wait another second having him dictate our path,” Voight says of the POTUS. “Let us work together, get him out, and make this country what she stands for: Greatness, the land of opportunity, the land of the greatest soil our forefather’s fought for. Don’t let this President Biden tear down every inch that was sacrificed with blood, sweat, and tears for his dictation of lies.”

Note the choice of words here: “Dictate,” “dictation.” The man stops just short of calling Biden a dictator, which is rich coming from someone who sees Donald Trump as a beacon of hope. Textbook hypocrisy.

And you have to laugh that, on Twitter, Voight captions the video, “Can we all see eye to eye?” Come on, dude, in what way is this even an attempt at reasoning? He’s just making big, empty statements and expecting everyone to nod complacently. It’s kind of hard to see eye-to-eye when the person you’re talking to has their head up their *ss.

At any rate, the video was posted a few days ago with little fanfare—just the usual MAGA heads sucking up to one of the few C-list celebrities who believes in the same nonsense as them. But, today, the internet at large has caught wind of the clip and, as expected, it’s lead to some hilarious dunks on Voight and the conservative hoo-hah he’s spouting:

Apparently, Jon Voight wants to be remembered as a blithering shithead and not an Oscar-winning actor. https://t.co/qBJdHHDYgM

Not Jon Voight continuously reminding us why Angelina Jolie cut him out of her life.

Jon Voight's ardent belief we should take his silly pronouncements seriously would arouse pity but for the sheer arrogance in his display of ignorance of history, government, and politics.

Starting to think that Jon Voight took his role as a Nazi officer in “Uprising” a little too much to heart.

This is the most asinine video I’ve seen. Trump trying to overturn everything that is sacred, free and fair elections, somehow does not register as a moral issue to this actor. https://t.co/cA0tXa9VfS

I’m beginning to think that scene in Seinfeld, when Jon Voight bites Kramer, wasn’t in the script. pic.twitter.com/roqQEB5EuT