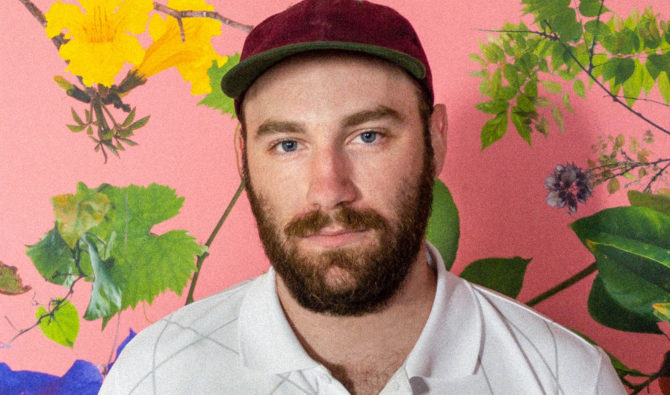 Jonah Greenstein will premiere his new film Daddy this October 28, with an encore on Oct. 29, at New York City’s NewFest Film Festival. After studying at New York University’s prestigious film school, Greenstein has spent years cutting his teeth in the editing bay and by direction short films. Daddy marks his first outing into the world of features as writer/director, with a story inspired by his own experiences with dating/hook-up apps.

Daddy follows a young street hustler named Joseph as he hangs out with a series of men he meets on hook-up apps in search of cash and a place to crash. As his story progresses, questions begin to arise: Is he after money? Love? Or something more sinister?

Greenstein took a moment to talk to Queerty about the film, being a first time director, and the culture of hookup apps.

So this is your first feature film, and it’s about some very disturbed people. How did it get started?

About a year and a half ago I started meeting people online, through gay chat apps. A variety. And so I began writing characters that I was beginning to know very well. They were these sort of disparate vignettes. It sort of arose organically—the story and the main character who I sort of designed later as a link between these characters.

That’s unusual, in that you started the secondary characters and ended up with your protagonist.

Yeah, so the structure insofar as a series of encounters. I’m interested in community. A community forms around these apps. I’m interested in how they function, and how they dysfunction as well. Something you’ll notice if you log on to any of these apps is many of these profiles over the age of say, 40, will have the words “not generous” on them. The prevalence is a bit amusing. Joseph is an imagining of a younger man who makes those words necessary for the older men.

So the inception of this was a series of guys you met online. Is Joseph [the main character played by Alexander Horner**] based on someone specifically?

The film isn’t autobiographical, although I did invest in it personally. And I wanted to change the context, and I wanted to change the wants and needs to be rooted in a circumstance. Joseph is homeless and he is looking for places to stay. I was interested in the spectrum of different desires that people come to these apps with, and how those motivations collide and create tension. So Joseph is using them transactionally, but he’s also looking for intimacy. 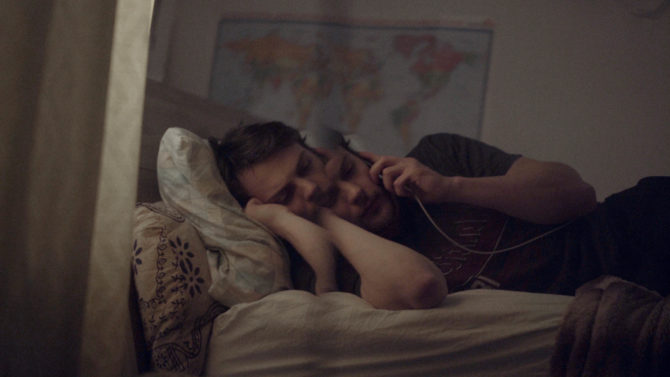 It’s reminiscent of the film Shame with Michael Fassbender if you saw that.

It also reminds me of the Kubrick film Eyes Wide Shut. An Eyes Wide Shut poster even makes a cameo. In the same way Eyes Wide Shut covers a sort of sexual underground, Daddy covers similar territory but with some very different observations. What is it about this objective style that you’re trying to evoke?

It’s an approach that I think is important. [The characters] aren’t people your average audience member is going to necessarily connect to in the way that many more conventional narrative films will attempt to bring you along on that character’s journey and feel what they’re feeling. I don’t think, in my film, that you relate to the way they’re feeling or their decisions. It’s important to note that we can learn from observing human behavior.

Something that is so fascinating about these types of encounters is the sort of intimacy blended with detachment. The contrast. So with the visual style, I wanted to evoke that kind of contrast as well. There’s almost a glamour to it, right? We’re watching something disturbing take place but it’s beautiful imagery.

For the characters, part of the allure is the glamour of sex and sexuality, whether it be transactional or about intimacy. One thing that is a bold creative choice is that you show a lot of full-frontal nudity. It’s a risky thing to do. How do you prepare your actors where they’re in scenes, not just where they are naked, but they’re also simulating some very intimate activity?

It’s a very relaxed set. It’s a very intimate set. The crew consisted of [cinematographer] Jake Saner and myself for the most part. Just the two of us and the actors. So we were able to contribute to an atmosphere that’s conducive to a comfort level. 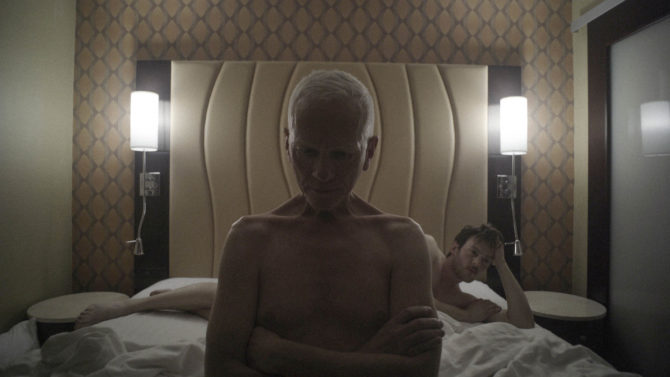 And the actors, were they nervous about it?

Largely, the people that I found using said apps, they’re used to combining nudity with strangers. There’s a lot of exchange of photographs on these apps. It’s almost like backstage casting with nudes—you have headshots and you have other shots.

You’re saying you actually cast the film off Grindr, or offer sex and dating apps?

To a large degree, yes. I also did location scouting. [In a follow-up email, Greenstein added that some of the actors are professional.]

Wow. That’s got to be a first.

The goal here is to create an authentic portrait of a community.

I wouldn’t want to make a broad, sweeping statement. I don’t see it as a movie about gayness per se, but about isolation and pain.

Now is NewFest the first time you’ve shown the film?

This is the world premiere, on Sunday. We’re hoping for a limited theatrical run and then VOD.

**EDIT: Though the IMDB lists Richard Lear in the role of Joseph, Greenstien says the role is actually played by Alexander Horner. We’ve changed the article accordingly.