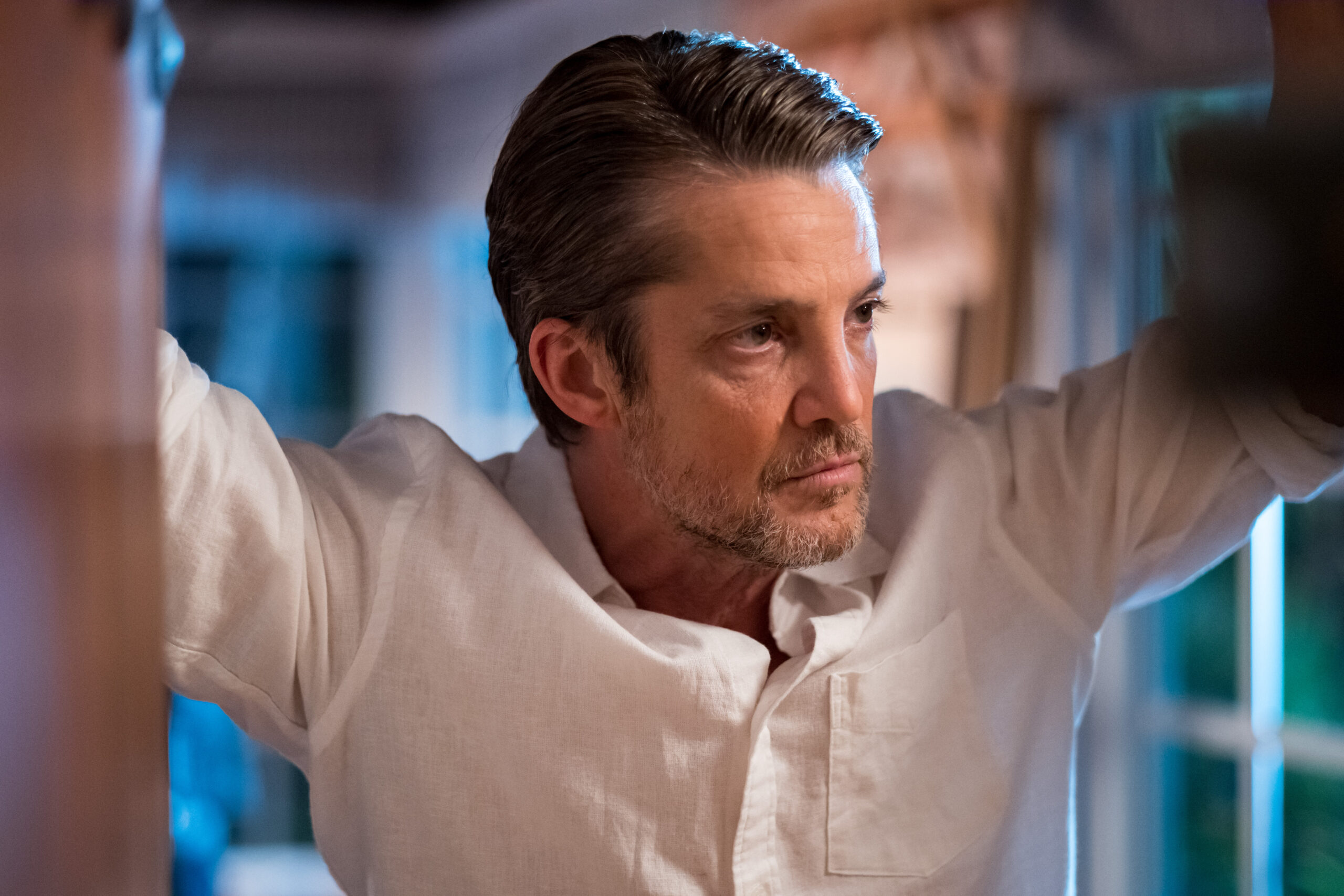 Jonathan Del Arco sits grinning over a cup of French coffee when we first see him sitting in the sun outside a Burbank cafe.

In Borrowed, Del Arco plays David, a painter who solicits Justin (Héctor Medina, in his first English-language role) to model for him on a gay dating app. When Justin arrives, David refuses to let him leave, holding him prisoner to his every whim. But both men harbor dark secrets, and David may have other motivations beyond the sexual for holding Justin captive. Directors Carlos Rafael Betancourt and Oscar Ernesto Ortega direct from a script by Betancourt, Ortega, and Jim Kierstead.

In this special Queerty exclusive, Del Arco grants his first English-language interview to discuss his biggest career gamble to date, his career close calls, and the film’s enigmatic statement about queer, Latino men.

Borrowed debuts at the Miami Film Festival on March 9. A wide release date is pending.

This is such a different kind of character than I’ve ever seen you play.

Yes, he is definitely not a person I’ve ever played before or I would have even thought of playing.

Honestly, it just came to me out of nowhere. When I first read it, I said no. I love a challenge, but on a first read, I was like, there’s no way I could be believable in [this]. I felt like I looked too young for the role. I mean, it’s a daddy category.

So I said no to the audition. And my agent and my manager read it and said, “You would be amazing.” So I reread it. I found things in that second read that I thought I could successfully hang my hat on. He’s a caretaker. His intention is to actually protect by kidnapping, to keep the guy from going away. He’s lonely. Then I met one of the directing team. They’re brilliant, young guys.

I watched The Last Rafter, which is the film they did [with Héctor]. And I couldn’t believe that was the same actor.

That’s how much he changed. I got excited about that. Because I was like, these guys know talent, because they’re in business with this brilliant actor. And I wanted to do something in Spanish.

As I worked on it, I was like, Oh, these people that have shared trauma. David’s trauma really centers around cultural and toxic male norms that are placed on men. “This is how men behave.” But in his heart, David’s sensitive, heartbroken, an artist.

So that attracted me as well. I think there’s a line in the movie about, “He threw me into the streets, into the military,” and that’s such a story of queer people. Depending on the part of the country that you live in, you are either thrown to the curb or you are made to bend yourself into a pretzel to please. He’s someone who did that in his early life. He had a son that ended up being an addict. For him, he thinks it’s because he’s gay.

When you’re dealing with this kind of material that is so centered around power dynamics and abuse, how does that affect your relationship with your fellow actor?

Safety and trust are super important on something like this when you have to do nudity and violence. [Héctor & I] shared a dressing room and we hung out a lot. It was really actually important for me. Héctor is a very instinctive actor. In the scene where I locked the door, his desperation just broke my heart. I went home and I cried. I know it’s a movie, but I really felt I’d done it after. 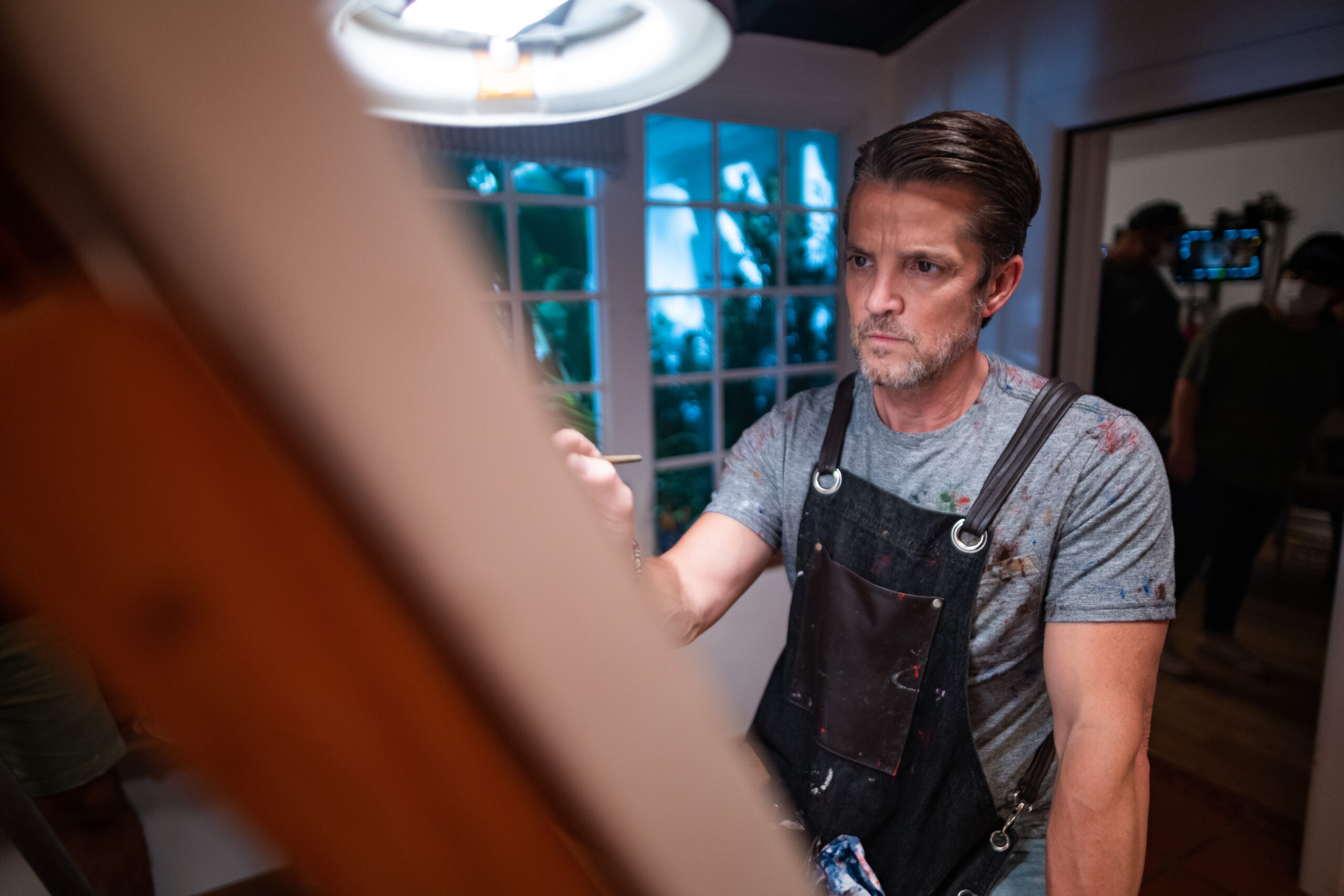 This is also a very Latino story. The most elusive quality of the movie is I think what it’s saying about masculinity among Latino men. What statement are you making in your performance?

Well, for me it is an exploration of toxic masculinity, specifically in the Latino community. What a man does, what a man’s responsibilities are. David is structured, did all the right things, but it actually became a bomb. And now he’s behaving in ways that are destructive because of those draconian ideas. His shame is about being who he is. I think informs all his actions really. Shame is a big piece of it and also guilt. The ultimate guilt of feeling like because of who you are and because you chose to live your truth, you left your wife.

I think that’s one of the things that excites me about the movie. I kind of want that mirror held up to my own community, to look at that and be able to see themselves. What’s straight, what’s macho and what feminine.

Absolutely. Oscar and Carlos’ style is such that they use a lot of unbroken takes, whole scenes playing one shot. That includes your confrontation scene which requires you to be extraordinarily, emotionally vulnerable. Did you rehearse?

I rehearsed. It’s a 10-minute monologue. Because it was going to be done in one take, I did ask to block it the night before.

This was in Miami, I mean, in August. It was super humid and hot. So we did it in one take.

That’s a lot of pressure.

It’s exciting. It’s a little like being an astronaut and getting geared up. No room for mistakes.

So when they’re about to roll camera, what do you do to put yourself in that kind of vulnerable position?

Music is super helpful to me. It triggers very primary emotions. On that particular day I began the music very early. I told everyone I wasn’t going to be chatty. And I was just very isolated right up until the moment we rolled. There was a moment in there that I’m actually choking, I think, in the take because I actually was sobbing more than I could control. It was like a tidal wave.

How has the perception of you as a “nice guy” actor blocked you from roles in the past? What are some parts you missed out on?

God, there were so many in the ’80s in particular. Pretty in Pink. I went in for the John Cryer role. My friend Johnny Crier and I were both on Torch Song together.

I didn’t know that.

I was in the mix for Batman Forever, for Robin.

Dead Poets Society. When it came out, it was one of my favorite movies. I think I was up for Robert Sean Leonard’s part, which is the really tragic one. That was pretty crushing to me. I could have been in that movie. Wesley Crusher [in Star Trek: The Next Generation]…

You were up for Wesley?

I tested for that role. But you’re like, would you have rather done Wesley Crusher than Hugh? Not necessarily. It would’ve just been a bigger job.

Tell me about the stamina of dealing with that.

At that age, you just have all the energy in the world, every opportunity is like, “I’m going to get this one!” It’s a weird career. There are things you get and things you don’t get. So, just got to roll with the punches.

How do you want Borrowed to shift the way your fans and the industry look at you?

I’ve shown [the movie] to a few friends who are like, “You are so scary in it.” And I was like, really? Because I think he’s a nice guy.

I’m hoping that the perception is that I could play darker characters that are much more complex, that are struggling to be better people. I liked playing that in a gay character as well. I don’t think we’re in an age right now where we need to feel a need to, just because we’re gay, to be heroes. So yeah, hopefully, people can see I can do those kinds of roles.

Last question then. Is this your best performance to date?

I’ll leave that for the audience and critics to decide. It was absolutely my most challenging and deepest dive into a character. I am very proud of it.

bottom of the barrel
37