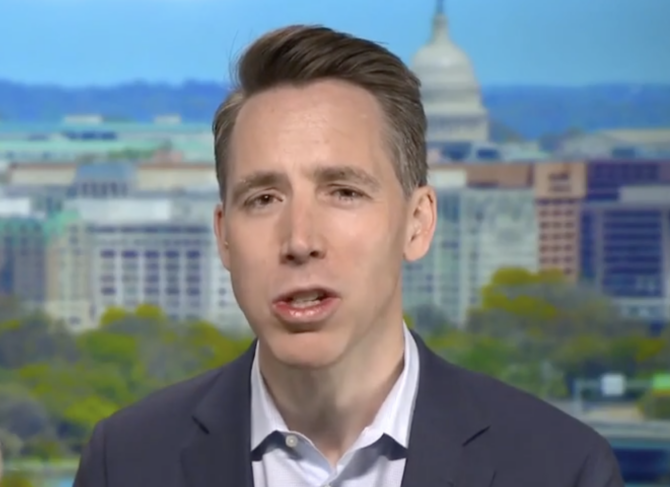 Sen. Josh Hawley has come up with the perfect solution for how to handle unwanted pregnancies in America now that the Supreme Court appears poised to overturn Roe v. Wade.

Speaking to his local ABC News affiliate last week, the anti-choice, anti-LGBTQ senator from Missouri, who believes the sexual revolution of the 1960s was “a great step back” for society, was asked about the possibility of abortion rights being stripped away and what should happen next.

“Adoption needs to become much easier,” he said. “It needs to be facilitated both for those who want to adopt and for those that want to give children up for adoption.”

“So, I think there will be work to do in those areas to make sure that folks who want to have babies and to adopt babies are able to do so and those who want to put them up for adoption can do so as well.”

Hawley suggesting adoption should be “easier” is deeply ironic considering that, just last year, he falsely claimed the Equality Act would force adoption agencies to “change [their] faith-based practices or face government punishment.”

During a Senate hearing, he essentially argued that religious groups must be allowed to legally discriminate against queer people, despite several faith-based organizations saying they can serve members of the LGBTQ community without a conflict to their beliefs.

Related: Josh Hawley tosses a word salad while talking about vaginas and we feel so sorry for his wife

In addition to that, Hawley has a 0% rating with the HRC for opposing the Equality Act, the Family Act, and the Every Child Deserves a Family Act. Meanwhile, he has a 100% approval rating from the antigay hate group, Family Research Council, which has tirelessly worked to strip away LGBTQ rights, including same-sex adoption rights, since 1983.

Since the Roe v. Wade draft opinion penned by Justice Alito leaked last week, Hawley has called women’s rights activists “pathetic thugs” and accused them of “terrorizing” Supreme Court justices. This morning, he and his wife, Erin, went on Fox & Friends to further accuse them of “assaulting” American families by exercising their right to protest.

“The hypocrisy from the left is really unbelievable,” Hawley, who supported the insurrections who killed a cop on January 6, said. “Here we have the White House encouraging people to go out to do engage in what amounts to harassment, which, by the way, is illegal.”

You had no issue with folks targeting the homes of school board members. You also had no issue when you raised your fist in unity with the folks who attacked the Capitol.

Any thoughts on people yelling at women going into Planned Parenthood Offices.

If the protesters had raised their fist in solidarity with opposition to the ruling, would that have changed your mind?

It’s strange how people pick and choose which protests are okay and which aren’t. Your upset about this but not January 6th? I’m sorry but I support all peaceful protests and speak out against all non-peaceful protests….no matter what issue they protest.

Did you speak out when Dr Fauci was threatened at his home?

The Supreme Court okayed the protesting/harassing of women outside of women’s clinics, citing freedom of speech and their right to protest. Alito voted for that himself. Now he doesn’t like it? Now it’s not okay when someone does it to him? That’s too bad.