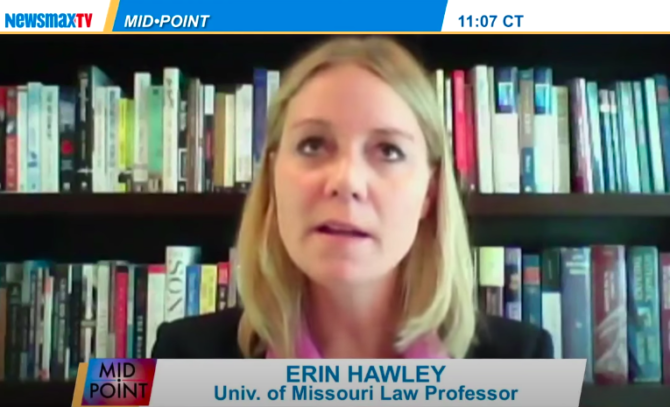 Sen. Josh Hawley‘s wife, Erin, has just filed a criminal complaint against the organizer of a peaceful protest that was staged outside the couple’s suburban home near Washington, D.C. last month.

Related: Cops say protest outside GOP senator’s home was “not that big a deal” as he continues crying on TV

A local magistrate has determined that there is probable cause to charge Patrick Young with a misdemeanor for “violating the tranquility of a home” after he and a small handful of others gathered outside Hawley’s house to object to the senator’s claims that the 2020 presidential election was illegitimate.

Footage from the incident showed a dozen or so peaceful protesters gathered in the street outside the residence. Most of them remained off the property, although at one point a group of about four people calmly approached the front door and rang the bell before leaving behind a copy of the U.S. Constitution.

At the time, Erin, who has ties to the antigay hate group Focus on the Family and has been a commentator on the ring-wing propaganda network Newsmax, was home alone with the couple’s newborn daughter.

In her statement, she said the protestors “frightened” her when they shouted “threateningly” and refused to leave after she told them she had a baby.

“The doorbell rang, and from downstairs, I could hear loud noises at the door: knocking, stomping, shouting, or some combination,” Erin recalled in her statement. “I went upstairs to see what was happening… The protestors were screaming with bullhorns and shouting ‘Come out, come out!’ I was frightened.”

Since the incident, which she claims was “actually illegal”, Karen, er, Erin says she’s grown so “fearful” for her safety that she’s had to hire private security. She also asserts that the protesters vandalized her property, although the judge found no grounds for that complaint.

If the Antifa scumbags can terrorize my family, they can do it to any family in America. People should be safe in their own homes. And we’re not going to sit back and take it pic.twitter.com/umzOMBiA6l

Meanwhile, Young says he hasn’t yet heard anything about the criminal complaint filed against him, but he calls Erin’s claims “slanderous” and is accusing the Hawleys of using their power to harass him.

“If a summons has been issued, it is outrageous that a rich and powerful person–a United States senator–can go to their magistrate to get a summons to harass a normal person,” he says.

Last month, Juan Vazquez, a spokesperson for the local police department, told the AP that the “people were peaceful” and when they were confronted by officers “everyone just left.”

“There were no issues, no arrests,” he said. “We didn’t think it was that big of a deal.”