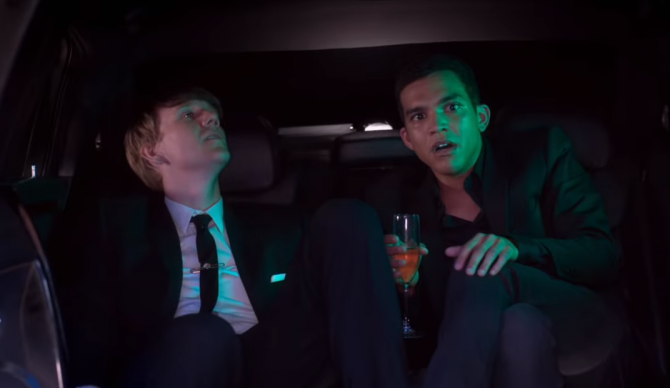 Australian creator Josh Thomas is probably best known for his show Please Like Me, which was nominated for five Australian Academy of Cinema and Television Arts awards during its four-season run. Now, three years after that show wrapped, he’s back with Everything’s Gonna Be Okay, a new comedy series that tackles a number of difficult issues, including autism, sex, consent, terminal illness, death, and grief.

“This show is just three characters,” 32-year-old Thomas tells E! News. “I wanted a character with autism, I wanted a teenage girl—I always think teenage girls are really interesting, and then I’m in it…because it’s my job…If they let you be in your own TV show, of course you’re there, yeah.”

Thomas plays Nicholas, a gay entomologist who moves to the U.S. from Australia after the death of his father and becomes the guardian of his two American half-sisters, Matilda and Genevieve. Along for the ride is Nicholas’ boyfriend, Alex.

The relationship between Nicholas and Alex develops over the course of the season, beginning as a casual affair and eventually turning into something more serious. Thomas says that in writing the series he tried to show gay characters at their very best but also at their very messiest.

“Freeform, you know, they’re open to stuff,” he says. “I mean, they hired me because I was gay. That was a big plus to them. They love diversity and they love all that stuff.”

The series is being praised for its realistic handling of gay sex.

The network’s reaction was nothing new for Thomas, however.

Everything’s Gonna Be Okay airs Thursdays at 8:30 p.m. on Freeform with new episodes becoming available on Hulu and demand the following day.