JT LeRoy took the literary world by storm in the early 2000s.

Heralded as a defining voice for a generation, the genderfluid, bisexual HIV+ author captivated readers with his autobiographical novels about growing up with an abusive prostitute for a mother and his own subsequent life as a drug-addicted hustler. LeRoy’s tales of abuse earned him worldwide adoration. Rock stars and Hollywood brass idolized him.

There was just one problem: he was invented out of pure cloth.

By the mid-2000s, reporters uncovered the real story: that JT LeRoy was a fictional creation of the fevered imagination of Laura Albert, a middle-aged woman. In public, Albert’s sister in law Savannah Knoop donned a wig and sunglasses to portray the eccentric author.

We find Savannah Knoop The London Hotel in West Hollywood, lounging on a couch and playing with their braided hair. Knoop, who identifies as non-binary, sits next to their longtime friend Justin Kelly, the director of films like I am Michael and King Cobra.

Together, the two penned a script based on Knoop’s memoir of posing as JT for Kelly to direct. Though it first debuted at the Toronto Film Festival to glowing reviews, JT LeRoy finally hits American cinemas April 26. Kelly’s most accomplished movie to date, the film stars Kristen Stewart, Laura Dern, Jim Sturgess, Diane Kruger, and Courtney Love.

Kelly & Knoop welcomed Queerty to join them for a chat about the film and its scandalous origins.

Savannah, this story starts with you. How reluctant were you to revisit this time in your life?

SK: Actually, I put out the book in 2007, and someone came around and wanted to option it. I was like…[whispered] no.

Then in meeting Justin, we sort of became friends organically and then got into the idea of adapting this whole experience into a script, I was probably reluctant. But then meeting Justin I was open to the possibility just because I felt kind of comfortable. Ultimately it was about trust.

Justin, what did you have to do to convince them that you were right for the job?

JK: Good question. I was so blown away by the memoir, the fact that they’re a great writer, besides just having played one.

The fact that I’ve wanted to be a director my entire life. I initially grew up loving John Waters and Priscilla, Queen of the Desert and Rocky Horror Picture Show which led to an obsession over all these French directors and Almodovar. It just felt like such an incredible mix of everything that I love. A bit of camp and comedy, drama, emotion and the fact that it was a known true story. When we first talked about it I’d made three short films and edited features. All I had to offer was my take on the story. I was sure someone more accomplished could just swoop in and take this project.

But what [Savannah] says makes sense: You could just give your memoir away and not know what they’re going to do with it or how they’re going to treat it. Or, you could work with someone—I was already in the queer arts scene in San Francisco. I do remember meeting at a sandwich shop in the Tenderloin and being like, “Can I make your memoir into a movie?” And they were like, “I have to think about it for a couple of months and get back to you.”

SK: It was actually that I was going on a trip…

SK: So we started working on it together almost 10 years ago.

Justin, I know you say you were a fan of JT LeRoy. You are also drawn to subjects in your films, be it Michael, Brett Corrigan or Savannah, characters of amorphous identity who make questionable choices. What attracts you to these stories?

JK: I might need to go to therapy to find out.

It’s a funny thing because all three of these films, aside from being true stories, queer and set in the early to mid-2000s—it’s actually an accidental trilogy I keep saying. I don’t know. I think it’s a pretty human thing. I think we’ve all thought about what it would be like to be someone else of another gender, or in another job, living in another country. It’s hard to break free from what we were given and what we grew up. I think that’s part of the fascination. I’m definitely drawn toward more extreme [characters], but I think the desire to control how they’re perceived, to create and control your own narrative. We all do it in our lives, especially nowadays with Instagram. I think I’m drawn to more extreme versions of those stories. And I don’t know why.

Maybe one day I’ll find out.

So ok, you guys started writing the script. What was your collaborative process like?

JK: It shifted a lot. It started literally sitting side by side in San Francisco. Then it moved to phone calls, screen share via iChat, taking long breaks. Having friends read it.

SK: Yeah, sort of, I think it took sort of took as long as it wanted to take. Sometimes we’d do a draft and put it down because we had the time. And then we’d look at it and do a total revamp. I think editing is something we both really believe in. So doing different versions and sort of tightening and expanding and contracting. That was the process of all these different rewrites.

JK: The biggest challenge is that, as with every true story I’ve done, there’s like the tabloid one-liner that you read about, and then finding what the real story is underneath. It was hard to find that in this one. I think earlier drafts were about JT’s fame, travel, photo shoots…all that stuff. We didn’t want to do that story, so stripping it down, the movie we wanted to make was a true character study. How’d they pull it off, and way more importantly, why? It took a long time to get there oddly enough.

My interest is always telling a story during the time period of when JT had a body, and within that time frame, going into the memoir and realizing the more interesting story was Savannah’s coming of age. Getting to the heart of that story.

So we’re a queer interest site…

JK: Featured on a laptop in King Cobra, by the way…

Hey, we love you. But Savannah, you identify as non-binary and gender fluid?

So with the whole process of being JT and exploring this whole other component within yourself, what role did that play in your coming out?

SK: I mean, I’ve come out several times since. I do think it was informative. It definitely wasn’t like Eureka, I’ve never thought of this! But it was a sort of the volume was turned up really high in the JT world. The feelings that we all have of coming out are like having glimmers of coming out as queer teens. Laura [Albert] already had this narrative that JT was sort [non-binary]. Then when I started going out in public as JT it was always wearing a disguise and saying I could be anyone. I might have wanted to withhold that from myself. So in some ways, it was illuminating, and it felt good to be in that free space.

And to explore something.

SK: Yes. And in some ways, because you’re sort of dancing someone else’s choreography, you’re just trying to do the best you can and please your choreographer. But also, you’re almost freer because it’s not your life. The terms are loosened, and I think that’s also part of it.

Choreographer, dancer, coach, and sports star, whatever the different kinky ways of speaking about it are. In some ways, the themes of power: We did get into this heavy duty power dynamic. To me, one of the queer elements of it is the way the power dynamic shifted all the time. 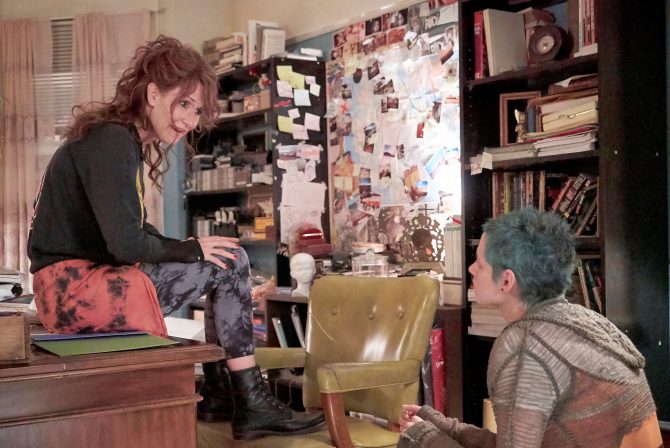 So how involved was Laura Albert in development? Did you consult with her?

SK: In terms of involving Laura with the story, I had sort of asked her while I was writing the memoir untangling some of the details, I asked her if she wanted to write it. Hence comes the line [at the end of the film] “Just because you played him, doesn’t mean you are him.” In dealing with her through writing the memoir, I knew there was no room for someone else’s perspective. I felt like I knew I had been there, I knew that I had an intense experience that was mine, not someone else’s. So in dealing with that, it was sort of clear to tell this story from the perspective of one person. And we had the primary source. And I think it’s important to remember that one person’s point of view doesn’t negate another’s. I think that the film gets at that a lot.

So were you on set every day?

JK: Being there for Laura and Kristen, they loved having someone to bounce ideas off of.

Justin, what was your approach to directing the actors? Did they improvise?

JK: I’m always super collaborative. The script is a total blueprint. I’ve been so lucky to work with James Franco and Slater and now two of my favorite actors. They’re so experienced. We worked so well together. They had such great ideas. The most fun is getting the perspective on things, changing the dialogue, coming up with new stuff. Laura Dern, especially as “Speedy” [JT’s fictional manager] with her cockney accent improved a great deal. There was some hilarious stuff that didn’t make the final cut.

JK: But before shooting, we go through the whole script page by page going over motivations, why certain things happen. We talk things through. We get on the same page before so that when we’re on set it’s more about blocking. I’m a four-take average kind of person. We do enough prep to get it right. 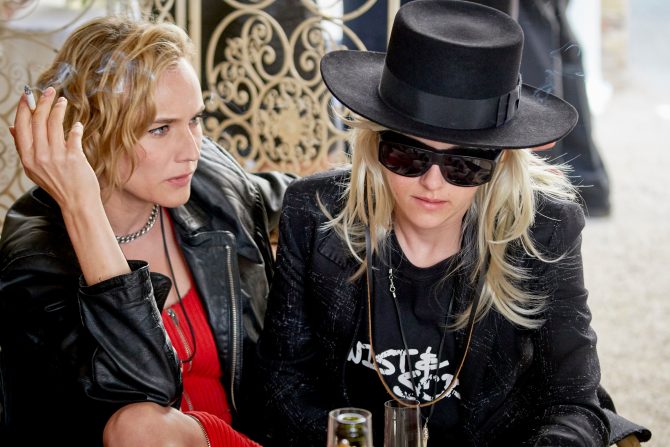 This is a film about the disconnect between what is real and what is projected. This is a theme that is really saturating culture right now: I’m thinking the Fyre Festival, Theranos & Elizabeth Holmes, Ana Delvey, Donald Trump, influencer culture. I would argue JT LeRoy is far less damaging than the others. But what is it about our current cultural climate that we’re sort of taking a step back and examining this phenomenon?

SK: What the Hell is going on? I think of the term “hypernormalizaton.” It came through as communism fell. Everything we see in the media and in public is a farce. But I think we’re in a moment where we’re dealing with holding lots of contradictions all at once. And I do think it’s about our political climate.

JK: All these stories stem from this Instagram era. What is perceived? Fyre Fest, Theranos, they came about from people who wanted to be something they were not. They pulled off these insane schemes, especially Theranos, which is batsh*t. These are examples of people being these heightened versions of themselves and it didn’t’ really work. The other thing, which especially happened with JT, is the, Oh shit, we’re caught. Now what? But their versions are a bit more calculated and involved in fraud and money and perversion.

And as you see in the film, there are reasons as to why they became JT, whether you agree with them or not. They were interesting.