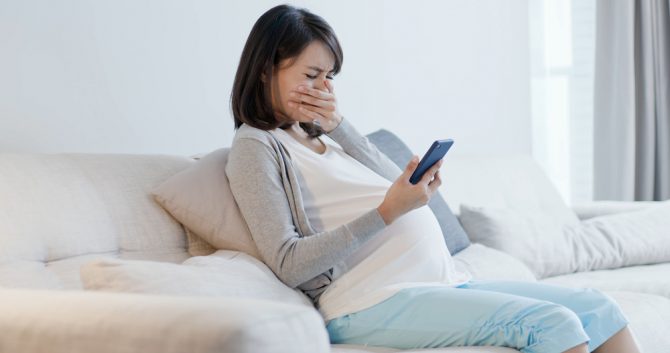 A young mom recently discovered her boyfriend has a secret Grindr account and she doesn’t know what to do about it, so she’s turning to advice guru Colleen Nolan for help.

Quick backstory: The woman and her boyfriend met when they were teenagers and have been together on-and-off for nearly a decade. They share an apartment and recently had a daughter together.

“Just before our daughter was born I found out he’d been using the gay dating app Grindr,” the woman explains. “I had a feeling something was wrong and checked his phone and found he’d been messaging a man he’d met on there.”

Related: Her Husband No Longer Wants To Have Sex So He’s Gotta Be Gay–Right?!

When she confronted her boyfriend about it, he assured her “it wasn’t sexual and they had just been chatting.”

“I was so wrapped up in preparing for our baby, I pushed all my doubts to one side and let it go,” the woman writes.

After the baby was born, she says, “everything seemed perfect”. That is, until recently.

“I’ve discovered he’s been back on Grindr and messaging different men,” she explains. “I’ve confronted him about it again and he swears he’s not gay but I just don’t know what to think.”

She can’t help but wonder: Is he attracted to guys?

“I can’t face the thought of being a single mum,” she laments, “but I can’t stay with somebody who is attracted to men either.”

Related: Woman Panics After Discovering Her Friend’s Husband On Grindr

In her response, Colleen tells the young mom: “He may only be chatting with these guys, but that’s still cheating.”

“If he was messaging girls he’d met on a dating app, that wouldn’t be OK either, would it?”

The fact that he’s chatting with men, she says, complicates matters. Maybe he boyfriend is gay. Maybe he’s bisexual. Maybe he’s bicurious. Who knows? But until the woman sits down and has an open conversation with him, she’s never going to know.

“He needs to start being open and honest with you,” Colleen writes. “I don’t think it’s acceptable for him to shut you down or refuse to speak about it.”

“You’re a couple, you have a baby and you deserve a proper explanation as to what exactly is going on.”

What advice would you give this woman? Share you pearls of wisdom in the comments section below…